All in the Game: beleaguered Leeds fans left crestfallen 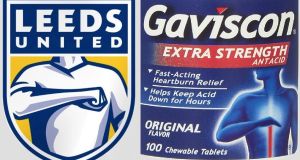 Angriest agent of the week: It sounds like it might be Augusto Paraja, the agent for AC Milan’s Gustavo Gomez. The Paraguayan defender isn’t getting a whole lot of game time with Milan, so he wants to join Boca Juniors. Milan want €7 million, but Boca would prefer him on loan for now, with an option to buy at the end of his spell.

How have the negotiations been going? Not tremendously well.

“The Boca directors flew all the way from Buenos Aires, they brought a shirt as a gift and they didn’t receive so much as a coffee in return,” Paraja told Tuttosport. “That was the start, so you can imagine how the meeting ended. Even in the Argentinian third division they don’t behave this way.”

Asked if the rumours were true that he’d chucked a chair through a window during the meeting with Milan, Paraja replied: “I prefer not to talk about what they say happened in that office.” We’ll take as a yes, then.

Mind you, it doesn’t sound like Paraja is doing the best of jobs in persuading Boca to part with €7m. On Gomez: “If you take a third or fourth division player and you put him in Serie A you can’t be surprised if he makes a bad impression. He never plays, there’s no chance he’ll be used.”

A big sell, that.

There’s a reasonable chance you heard about Leeds United’s woes last week when they unveiled their new crest, the reception it received, which ranged from rage to hilarity, not quite what they had anticipated. The general consensus was that it looked like the heartburn sufferer on the Gaviscon bottle.

Leeds were taken aback because, they said, they had consulted 10,000 people before choosing the new design. The suspicion was that the bulk of these must have been Manchester United followers taking the mickey, although the Leeds fanzine people Square Ball probably had it right:

“A big glossy, exercise in branding done by a consultant in Shoreditch. We need to go for a soya milk latte and a lie down.”

World of mouth I

Orangeman Jose Mourinho on Manchester City’s claim that they withdrew from the Alexis Sánchez chase for financial reasons, and not because he had chosen to join United.

Biggest-Smile-Inducing Quote of the Week: “I’ve been looking forward to that moment for the last few months - just being able to get the kit on, doing up the shin-pads, rolling my socks up and walking out there. It was great to be able to feel like a footballer again - it’s a fantastic feeling.”

Séamus Coleman on returning to action, for the first time since March of last year, with the Everton Under-23 team. Fantastic’s the word.

Happy birthday, Gianluigi Buffon, 40 on Sunday. (Francesco Totti: “What gift would I give him? A time machine. Maybe he’d give me a lift.”)

“At this point I’m a happy person. I prefer to find myself on the high seas with no fuel after crossing at a speed of 100 knots, rather than returning slowly and sadly to port.”

The bard that is Gianluigi Buffon, talking about (what might be) his final season in football.

“I don’t really watch much football. I’d rather watch the golf to be honest.”

“We are breathing in this moment, we are not in emergency in hospital, we are still in hospital but we can accept visits now.”

Carlos Carvalhal after his Swansea side showed some signs of Premier League life by beating Liverpool.

Carvalhal again, this time on how a gridlocked Liverpool finally drove out of Swansea with zero points.

Cries of ‘Champions League, you’ll never win that’ are often crooned in the direction of clubs like Arsenal and Manchester City by the likes of Liverpool, Chelsea and Manchester United fans. The Bristol City faithful, though, altered the chant a touch when City visited last week for the second leg of their League Cup semi-final. In reference to the competition they have won a record three times, they bellowed:

They probably won’t either.

More quotes of the week:

“When there is an injury to one of your best players it is not simple, especially when on the bench the only substitute is Ross Barkley.”

Antonio Conte. If Barkley was offended, spare a thought for the other subs on the bench.

“The first thing Ryan will have to do is to turn up for the games. Because when he was a player, he never turned up for half the matches.”

John Toshack advises Giggsy not to pull out of Welsh internationals with tweaked hamstrings and the like now that he’s gaffer.

“I am never going to be manager of Barcelona or Arsenal because I am so identified with Tottenham and Espanyol... I would prefer to work on my farm in Argentina.”

Mauricio Pochettino. Alas, there are more than a few Arsenal diehards who wouldn’t mind seeing Arsene Wenger working on a farm in Argentina.

Heads in a spin

Dizziest Footballer of the Week: Most probably Ecuadorian international Bryan Cabezas. Eighteen months ago Italian club Atalanta signed him from Independiente del Valle in Ecuador, but last summer loaned him for a year to Panathinaikos. Due to money problems, though, the Geek club ended the loan deal a fortnight ago, so Cabezas returned to Atalanta. They then agreed to send him back to Independiente on loan until June, which he was grand with, but now you can find him at Italian Serie B side Avellino.

What happened the Independiente loan arrangement? Over to Football Italia:

“Cabezas was due to return to Independiente on loan when a bizarre contract mistranslation ruined everything. It’s claimed the contract was translated using software that changed his name throughout the document from Cabezas to Heads. That is a literal translation of his name, but ultimately made the contract null and void.”

1 No final round heroics for Rory McIlroy at US PGA
2 The game they loved so well: How cricket united Hume, McGuinness and McCann
3 Solskjær praises Martial for building himself into ‘powerhouse’ centre forward
4 Michael Schumacher’s family share rare update on condition
5 ‘The plan is to keep the lads wrapped in bubble wrap, so to speak’
Real news has value SUBSCRIBE