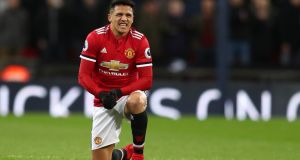 Alexis Sanchez of Manchester United. His agent, Fernando Felicevich, declined to comment when asked if he was asking for a £15m fee himself for the forward to agree a move. Photograph: Getty Images

The January transfer window closed with a blizzard of late moves, delivering £50 million as the new normal fee for players – £142 million for one of the best, Philippe Coutinho – and undisclosed bumper paydays for agents.

Supporters are not told how much money agents make on deals or what work they did to secure it, but there is a growing recognition among clubs and governing bodies that the role of agents is out of control.

Fifa surrendered governance of agents in 2015, but its president, Gianni Infantino, now says the resulting free-for-all is intolerable. Agents are unlicensed “intermediaries” and can be paid by two or even three parties in a transfer.

In forthright remarks Infantino, who has set up a Fifa working party to examine how the intermediary and transfer systems can be reformed, said: “I am very concerned about the huge amount of money flowing out of the football industry.

“The commissions paid to intermediaries continue to rise while at the same time the money redistributed through the game and spent on training young players is falling. These increasingly larger transactions are often not done in a clean, open manner , and raise a lot of questions about potential misuse of funds. We have to tackle this issue.”

Uefa, which has calculated that more than €3 billion was paid to agents by Europe’s top clubs between 2013 and 2017, is on the working party. The Uefa president, Aleksander Ceferin, voiced his concerns last week and acknowledged clubs’ long-standing complaint that agents are no longer working on behalf of players to negotiate the best salary but are intermediaries who have to be paid by clubs for bringing the players to them. Ceferin said clubs tell him the approach of some agents is: “Look, you will pay me 50 per cent of the transfer or the player goes somewhere else.”

Uefa has its own group examining reforms under the auspices of the European Union, including a cap on agents’ fees, importantly in partnership with the top clubs in the European Club Association; the European Professional Football Leagues – of which the Premier League, which is doing its own work on agents, is a member – and the international players’ union FIFPro. In a firm joint resolution they committed to reforms, stating agents were “disproportionately well-remunerated for their services”.

There is no transparency for the money banked by intermediaries, nor for the role they play in transfers. Of the noted deals in January the agency Wasserman has denied reports it was paid £7 million for handling Ross Barkley’s injury-delayed move from Everton for Chelsea.

Alexis Sánchez’s agent, Fernando Felicevich, declined to comment when asked if it was true he was asking for a £15 million fee himself for the forward to agree a move.

Kia Joorabchian, when asked what his fee was for work on Coutinho’s move to Barcelona from Liverpool, and for his views on the criticisms of agents made by Uefa’s joint resolution, replied via his lawyer his fee was confidential and threatened legal action if he was associated with those criticisms.

It was only owing to leaked contract documents that light was shone on the still barely believable £41 million made by the agent Mino Raiola from all three sides, Juventus, Manchester United and Paul Pogba, when the player moved to Old Trafford for £89 million in 2016. Yet the clubs, football associations and governing bodies do possess all the information about the staggering fees and modern transfer practices, and are finally talking seriously about reimposing regulations.

Considering that players sign with agents and entrust them with their moves and salary negotiations, FIFPro is notably critical and supportive of reforms.

Its director of policy, Jonas Baer-Hoffmann, believes agents’ fees are now “very often” a proportion of transfer fees rather than players’ salaries, and it is a “massive problem” for agents to be acting as brokers for multiple parties in a deal.

“They can have greater influence over where a player ends up than the player or the clubs. Their interest is not only where a player goes but which club will pay them the highest fee.”

Many agents say they still represent players, and are not paid excessively for finding them opportunities and decent pay at all levels of football. Dan Chapman, the vice-chair of the UK’s reformist Society of Football Intermediaries and Agents, agrees broadly that agents should act for only one party in a deal, usually negotiating for players, although he believes a cap on fees would be too restrictive.

The huge transfer fees and the wages players now bank – Sánchez is understood to be on £15 million a year basic at United – have always inflated with the game’s escalating TV rights and other earnings, because players are recognised to be the talent who attract the global following.

But there is no universal admiration for the talent of agents and there is a new resolve that their takings need to be reined in. – Guardian

1 James McClean still failing to learn his own online history lesson
2 Matt Williams: We all need a bit of Bud Maher’s resilience right now
3 A beautiful, happy accident - Moneyball is the best sports movie ever
4 Nicholas Quinn: ‘Swimming became how I dealt with grief’
5 Is it time for the New England Patriots to tear it down and start again?
Real news has value SUBSCRIBE
Crossword Get access to over 6,000 interactive crosswords