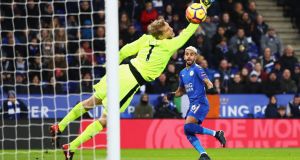 Riyad Mahrez: This month Leicester’s manager, Claude Puel, said it would take a bid of £100 million to persuade them to sell. Photograph: Clive Mason/Getty Images

Manchester City have been told it will take a “mind-blowing” offer to sign Riyad Mahrez from Leicester, with Pep Guardiola understood to be keen on adding the Algeria international to his squad after it emerged Leroy Sané will be sidelined for at least 11 matches.

After missing out on Alexis Sánchez Guardiola has identified the PFA Player of the Year for the 2015-16 season as an alternative, with the 26-year-old understood to be keen on moving to the Etihad Stadium. But despite reports in France Tuesday that City have submitted a bid of £59 million (€68 million) for Mahrez, Leicester say they are yet to receive a formal offer and are not keen on selling the player they bought from Le Havre for £450,000 in 2014.

Mahrez could now attempt to force their hand by making a transfer request, although that is unlikely to be well received at the King Power Stadium after a similar tactic last summer failed to produce a move. This month Leicester’s manager, Claude Puel, said it would take a bid of £100 million to persuade them to sell.

Guardiola’s change of heart appears to have been triggered by the news that Sané is expected to be out until the end of March after suffering an ankle injury in Saturday’s FA Cup win at Cardiff City. After the 2-0 win the manager said he expected Sané would be out for a month thanks to a horrific Joe Bennett challenge for which the defender later apologised.

At first Cardiff’s manager, Neil Warnock, stated that Bennett’s tackle was merely typical of English football. While Warnock has later changed his view, his first comments were put to Guardiola.

“He has more experience than me by far about the English football,” said the manager.

Meanwhile Manchester City have made Eliaquim Mangala available for loan, with Valencia, West Ham and Newcastle all interested in the France defender. Newcastle have already asked about Mangala with the manager Rafa Benítez keen on bolstering his squad before the window shuts Wednesday night.

City are looking for clubs to pay the majority of his £80,000 per week contract. Newcastle already have Kenedy on loan from Chelsea but their failure to sign Liverpool’s Daniel Sturridge on another temporary deal means they still have room for another under Premier League rules.

City’s willingness to let Mangala leave comes in the wake of the club’s record deal for Aymeric Laporte.

The Premier League pacesetters met the 23-year-old’s £57.2m release clause in a deal that makes him City’s record signing. They paid £55m for Kevin De Bruyne in 2015.

Laporte has been with Bilbao since 2012. He has played for various of France’s age-group teams and was called into the senior squad last year but did not play.

“I am very happy to be here,” Laporte said.

“City are a club with a lot of ambition and they are one of the best teams in Europe. I am looking forward to working under Pep Guardiola and trying to help the club achieve success. It means a lot that the club have shown faith in me and I am excited to get started.”

Laporte, who has agreed a deal to join City until 2023, becomes Guardiola’s sixth signing of the season. The defender is left-footed so can cover centre-half or City’s problematic left-back spot.

“We have assessed defensive options and he is a player we have admired for a long time,” said Txiki Begiristain, City’s director of football. “With his quality and ability to play out from the back, we feel Aymeric will fit in perfectly with Pep Guardiola’s playing style.”

Speaking at his press conference before Wednesday’s home match against West Bromwich Albion, Guardiola said: “He’s played since a young age in La Liga so at a high level. He’s strong in the air and fast. He’s got good quality and we are delighted.”

1 Nadia Power determined to push on to the next level
2 College football turns blind eye to Covid-19 by risking players' health
3 Rugby impasse continues as no deal reached in fourth round of IRFU salary talks
4 The Best Of Times: Harrington stares down Garcia in epic Claret Jug battle at Carnoustie
5 English RFU to prioritise match tickets for their corporate connections
Real news has value SUBSCRIBE