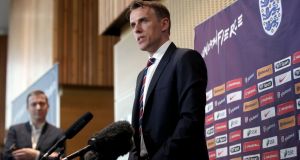 Phil Neville knew he was in for a tough fixture, speaking publicly for the first time since he was controversially appointed as manager of the England’s women’s team. In unprecedented numbers in the women’s game, the media travelled to St George’s Park to witness the unveiling of a coach whose sexist tweets might have seen him lose his job before taking charge of his first game.

But Neville remained composed, defending his right to lead the third best team in the world despite having little to no experience of the women’s game, even as a fan. That is until the hour mark when he was violently upended by a robust but fair challenge.

Asked to name the leading goalscorer in the Women’s Super League, Neville was stumped. For 20 excruciating seconds he mused on the question before eventually deciding it could not be Izzy Christiansen, an English forward playing for Manchester City. Annoyingly for Neville it was Christiansen.

“See, I did know,” he said, but the damage was already done. Neville will have to get used to people trying to trip him up because, through no fault of his own, it is an appointment viewed by many as a botched job by the Football Association given his lack of experience and knowledge.

“I don’t know every facet but I will,” he added. “When I went to Spain I knew three Valencia players. I didn’t know the language, didn’t know La Liga. But after three months I knew the language and every player and everything about Spain.”

At the FA’s national training centre Neville has a car parking space next to Gareth Southgate – even if he is being paid only a 30th of the salary of the men’s team manager. But if the last week has taught him anything – beyond a lesson in social media – it is that he will be held to a similar level of accountability. “Have I thought whether I’m doing the right thing? Actually, it’s been the opposite,” he said. “It shows there is a lot of passion for women’s football. There’s that scrutiny, that pressure. It’s actually where I like to be. I want to win a World Cup with this team.”

The first task was to persuade the public that a tweet, which seemed to make light of domestic violence, did not reflect his character. In 2011 Neville posted: “Relax I’m back chilled – just battered the wife!!! Feel better now!” But he now claims he was referring to a table tennis match.

“The words in 2018 are wrong, they were wrong in 2011,” he said, “They are not a reflection of my true character and they do not reflect the way that I was brought up by my parents.

“They do not sit well with me but I can explain it,” he added, “In isolation it was around a game of sport – table tennis, basketball while I was away on a family holiday. But I think my character stands up to any accusation that is levelled at me. Gareth Southgate is of that character and I am the same. I have lived my life right. I have got a wife, a daughter, a sister who is England’s netball coach. I have seen the sacrifices she has made. I’m a fan of women’s sport.”

There can be little argument that Neville’s name and his poor attempts at humour have put the spotlight on women’s football, which is often starved of attention. But he will be expected to bring results on the pitch, beginning with the SheBelieves Cup in March.

He will also be expected to wield his newfound influence and exert pressure on his old club Manchester United finally to set up a senior women’s team. Until recently they have been the only Premier League club without plans to do so, although it is understood they are currently in talks with the FA about the issue.

“I will be encouraging them,” said Neville. “I am sure they are in the process of doing it. They have a fantastic community programme for female players and coaches and, when they do set out their women’s team, it will be one to challenge City, Chelsea, Arsenal, Liverpool. I am sure they are working towards that. A club of the size of United should be the leaders, the pioneers.”

Sue Campbell, the head of the women’s game at the Football Association, has admitted there is a problem in women’s football with coaches and players having sexual relationships. Campbell was speaking at the unveiling of Phil Neville as the national manager.

His appointment came after two of the candidates originally shortlisted by the FA removed themselves from consideration when they were informed background checks would be conducted. Neville’s predecessor, Mark Sampson, was sacked after full detail of inappropriate relationships he had with players in his previous job became known.

“It’s an issue we have to deal with in women’s football,” said Campbell, “You have to understand the challenges when a coach and a player are in a relationship in the same team. It’s challenging for the other players, and maybe they can handle it with massive professionalism and discretion and I’m sure they do in many cases, but it’s an issue. You can imagine following the Mark Sampson case that potentially felt like it could be an issue for them.” – Guardian service

1 Worst sporting moment: White knuckle ride on a hate-filled night at Windsor
2 Rugby to return in England with rucking but no hugging
3 Worst Sporting Moment: Mighty Nijinsky misses moment of triumph
4 Irish roots with the bit of Jo’burg dog: Curtis Campher has arrived
5 Acute disillusionment the only response to growing FAI debacle
Real news has value SUBSCRIBE
Crossword Get access to over 6,000 interactive crosswords