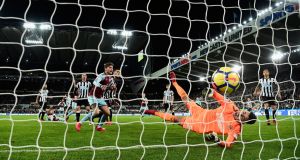 Sam Vokes’s close-range header went in off Darlow via the crossbar with five minutes remaining to cancel out Jamaal Lascelles 65th-minute opener, on a night when the main focus off the pitch on Tyneside was Leicester striker Islam Slimani’s proposed loan switch.

However, the Magpies’ lack of firepower was cruelly exposed once again as Joselu wasted a first-half penalty and a series of other opportunities to fire his side away from the relegation zone.

Burnley boss Sean Dyche was left to bemoan a first-half penalty decision which did not go his way and a disallowed goal, and will feel his team was worth at least a point.

Southampton recovered from a goal down to earn a 1-1 draw with Brighton but wasted the chance to ignite their season as their struggles continued in the final third.

They had recently shown signs of improvement and secured some encouraging results, but after under-pressure manager Mauricio Pellegrino started new £19.2million striker Guido Carrillo on the bench, they remain at risk of relegation and in 18th place.

Brighton represented beatable opposition even after Glenn Murray had given them the lead, but following Jack Stephens scoring for the second game in succession and despite their dominance, the winning goal Southampton so desperately needed did not arrive.

There was little to get those who braved the cold excited at the bet365 Stadium on Wednesday night as Stoke and Watford shared the points in a goalless stalemate.

Stoke had the best chance to break the deadlock just after the hour mark when Orestis Karnezis blocked Xherdan Shaqiri’s driven shot and substitute Peter Crouch headed the rebound straight at the goalkeeper.

The half-time parading of new signing Badou Ndiaye, who Stoke have signed from Galatasaray for a fee in the region of £15 million, was one of the few other instances that got the home fans off their seats.