Bournemouth exploit all of Chelsea’s frailties in stunning win 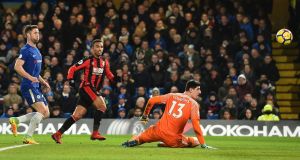 Olivier Giroud sat behind the home dugouts, burying his emotions in Chelsea training gear, though so much of this new start would have reminded him of his darker days at Arsenal. Only 24 hours previously he had been summoned from the bench as his old team succumbed to Swansea City. Now prised away by the Premier League champions, he endured his new side capitulating against another team threatened by the drop.

The Frenchman was supposed to have left nights like this behind. Instead, he shivered in dismay as Bournemouth, rugged when they needed to be and ruthless in an eye-catching spell after the break, ran riot in south-west London.

Theirs had been a startling performance, and one of a team who should clamber clear of trouble with ease if they perform to these lofty levels over the campaign’s last three months. This will rank as their best top-flight win, a result that will erode faith at Stamford Bridge. A first league loss in nine games this may have been but Chelsea’s ended up being a capitulation.

Perhaps their vulnerability had been signposted by the frustration endured early on. This had been disjointed and too frantic for comfort, a mess of a contest for long periods but precisely the kind of fixture into which Chelsea would have relished flinging Giroud to lead their line.

Without the onlooking Frenchman, or Álvaro Morata as he continues his rehabilitation from a back injury, Eden Hazard had been thrust back into that central No 9 brief, charged with wriggling in among Bournemouth’s streetwise centre halves. The Belgian was quick to pounce upon any hint of indecision, almost scuttling free of Steve Cook before the break after the defender’s heavy touch only for the visiting player to stretch out a leg and intercept, atoning for his error.

Yet, for all Hazard’s energy, there was no focal point to the hosts’ front line with Pedro and Ross Barkley, on his full debut, labouring to make their own in-roads. A pair of headers just wide from Gary Cahill and Marcos Alonso aside, Bournemouth comfortably held off their hosts to the interval.

Their own forays forward had carried a pacy menace, threatening to exploit indecision in a Chelsea rearguard shorn of Andreas Christensen before the half-hour mark to a hamstring injury. Jordon Ibe and Junior Stanislas countered at pace, Callum Wilson dragging his markers out of position with clever darts to the by-line, with the midfield working feverishly to hold sway. Only a tendency to over-elaborate blunted their threat.

That would be rectified after the break. If the disciplined nature of their defending had cheered Eddie Howe, barking orders constantly from his technical area, then the slippery nature of the visitors’ attacks would eventually yield reward.

Chelsea were still digesting Alonso’s near miss from a free-kick when Tiémoué Bakayoko dawdled in possession and, in the counter-attack that followed, Ibe collected from the excellent Wilson and slipped a pass between Cahill and Antonio Rüdiger for the striker to accept. Wilson’s finish was calmly and confidently slid under the advancing Thibaut Courtois and in, and a team who had won here back in the winter of 2015 sensed history might repeat itself.

The home side’s response was to fling on Cesc Fàbregas almost immediately for Barkley, whose rustiness on his first start of the campaign had been painfully evident all evening, in the hope of re-energising the champions as Giroud descended further and further into his new club coat. Yet none of this made for good viewing for anyone other than Bournemouth’s joyous support. Chelsea’s recovery was choked by another incisive and precise move upfield, again featuring Wilson’s driving run and pass to Stanislas at his side. The winger finished through Courtois’s legs and the hosts felt broken.

It was a panic the kind of which has not gripped in these parts since the unravelling of José Mourinho’s second spell in charge, a capitulation that took the breath away. Another Bournemouth corner duly inflicted more pain, Chelsea failing to clear before Stanislas’s shot was flicked in by Nathan Aké, formerly of these parts. Conte wore a look of utter disbelief as the visiting players tore away in celebration for the third time in 16 minutes.

Chelsea would be dismayed at the non-award of a penalty but they had been ripped to shreds with their game of catch-up hopeless. As much as the visitors were eye-catching, their hosts feel fragile in fourth.

Their display had been desperate.