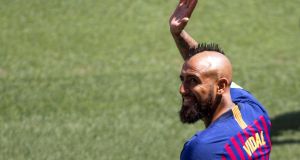 New Barcelona signing Arturo Vidal says he is stepping up a level in his career and is intent on winning the Champions League three times over his three-year deal.

The La Liga champions signed the 31-year-old Chile midfielder from Bayern Munich for a reported fee which could rise to €21 million euros and he was officially presented at the Nou Camp on Monday.

“To arrive at Barcelona is a much bigger step than Bayern,” Vidal said.

“I hope to be an addition who can help to win all the titles. With the confidence that the people have given me, I want to win it all.

“At 15 I promised my mother I would be one of the best. I’ve played for a lot of teams and now I’m arriving at the best in the world.”

Vidal, who won Serie A with Juventus four times between 2012 and 2015, and the Bundesliga in each of his three seasons at Bayern, has never lifted the European Cup.

Barcelona last won the Champions League in 2015, beating Vidal’s Juventus in the final, and rivals Real Madrid have won it in each of the three seasons since, twice knocking out the Chilean while at Bayern.

“I don’t have accounts to settle with anybody, just my objective, which is to win the Champions League, not settle scores with Real Madrid,” said Vidal.

“I hope to win three Champions Leagues in the three years I will be here.”

Witsel, 29, a central defensive midfielder who impressed for Belgium during the World Cup in Russia, will be given a four-year contract by Dortmund.

“We’re very happy that he has chosen Borussia Dortmund,” the club’s sporting director Michael Zorc said in a statement, adding that Dortmund would pay the release clause in Witsel’s Tianjin contract without revealing any financial details.

“Axel is a player with a great deal of international experience who has all the skills to shape BVB’s central midfield: tactical understanding, tackling power, speed, and creativity,” Zorc added.

Witsel began his career at Standard Liege and played for Portuguese side Benfica and Russia’s Zenit St Petersburg before joining Tianjin in January last year.

“I’m totally happy and also proud to be allowed to play for BVB soon. After our first conversation, I did not have to think twice, because for me Borussia Dortmund is one of the best clubs on the continent,” Witsel said.