Despite 6-0 defeat in World Cup final, women take home silver – and something priceless 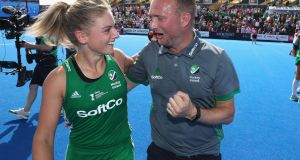 “We were half joking about that with some of the girls before the tournament,” she said after the final. “No it’s absolutely not something I expected seven days ago. It’s just been a huge team effort. It was one of the most special days of my life.”

Like the other players Watkins was both elated and deflated. Six goals are never easy to digest for a competitive player, especially in a world final. The celebratory mood would have to wait.

“Yeah, it was a bit funny being disappointed after the final whistle,” she added. “I had to give myself a second and say, ‘hang on – you’ve got silver in a World Cup.’ It’s unprecedented for our team and our sport.

“They upped the gear. They are a class apart from everybody else. It’s not going to take the shine out of our two weeks. I think we really have to reflect back on everything and take pride in what we’ve done and get home and thank everyone for their support.”

The team apparently have a Late Late Show appointment in September. That will go nicely with the team’s new-found profile and the natural popularity of this team. Coach Graham Shaw understands the dynamics of success and what effect it can have and how they have to now try to make it work for the squad.

“We’re here to obviously push the best teams in the world and when we reflect back, to beat the teams we have beaten and to come in here now and finish second in the world is just a truly remarkable achievement.”

How to move forwards and not fall back into old ways by expecting that success will organically make things better is something about which the coach is well aware. Now or never might sound dramatic but probably there is no better time to change the sport in a positive way.

“I think so, I think so. If people can’t get behind the sport now and see what we can achieve and the rewards we can give the Irish community, and also if we can put long-term strategies in place in a home and place, we can achieve it in the future again,” added Shaw.

“There is enough talent in Ireland to win medals in this sport. There is no doubt in my mind about that. It is about giving them the platform to succeed.”