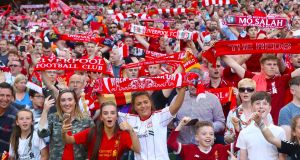 Liverpool fans in the stands during the pre-season friendly match at the Aviva Stadium, Dublin. Photograph: PA

Irish Liverpool fans got their chance to jump on the “Allez Allez Allez” bandwagon this weekend, 10 weeks late and one week early, as Jurgen Klopp’s team came to Dublin on Saturday for their penultimate pre-season fixture.

Liverpool’s visit to the Irish capital, and their eventual 5-0 win over Napoli in front of a capacity 51,000 crowd at the Aviva, was celebrated to the tune of one song more than any other. And the man who brought it to prominence also made an appearance - Jamie Webster.

The “Allez Allez Allez” song, which became the theme tune for Liverpool’s march to the Champions League final at the end of May, actually originates from a 1985 Italian disco hit - “L’Estate Sta Finendo” (“The Summer Is Ending”). Footballing variations have spread from southern Italy, to Turin and Naples, then Portugal and Germany, before arriving in Liverpool late last year.

Liverpool lifted it directly from Porto, via fans Phil Howard and Liam Malone who fine tuned the lyrics, before local musician Webster brought it to life. And social media did the rest. Eight months later and he’s in Dublin, a week after returning from Liverpool’s US Tour where he was a guest of the club and even received a special visit from Klopp himself.

“I heard it first in Porto, we were 5-0 up, and thought, that’s brilliant,” Webster explained during the sold out BOSS night he featured in at the Grand Social on Saturday night.

“It was still a bit slow and underdeveloped at the time, and only about 100 people knew it. Me and the lads agreed that if I go home and play that on my guitar at the nights we do, then social media will get a hold of that.

“From the first time I played it I just knew, it was like an infection, everyone just wanted to play it another time and another time. That video then circulated and I walked into the ground for the next match and heard it and I just thought, we’ve done it. Now I want to put it on record I’ve never taken credit for writing the song, but what I feel I’ve done is give it a bit of life and put it out there for people to see.

“Even on the plane coming over here people were on to me. In America it was crazy. l have people taking videos in my face just asking me to say “Allez Allez Allez”, and I’d say “Allez, Allez” in the camera and they were made up. I’m being asked for photos and autographs and it’s just all a bit crazy, I’m an electrician at home and I go to the matches week in and week out anyway, and I love playing music.”

The event held in Dublin was a BOSS night, the same event that Webster’s versions of the song took off at in Liverpool. Organised by Boss magazine, a fanzine in Liverpool, they have become a cornerstone of Liverpool’s match-day scene since 2010.

Conor Thompson, the Dublin event planner explains that the 300 tickets were sold out in Ireland almost immediately, “and we genuinely could’ve easily sold 700 or 800. We plan on doing more events here and when the videos go out we could get over 1000 people for the next one. There is a massive Liverpool fanbase in Dublin. But more importantly for these lads, there’s a massive fanbase who get the fan culture and get the music culture and that’s what it’s all about. Anyone can just go to the game and wear a replica kit.”

Webster started playing at the BOSS nights in 2013, but since playing in Kiev’s Shevchenko Park ahead of Liverpool’s Champions League final, things have spiralled and spiralled for him, and he now intends on releasing some of his own music. On Saturday night Webster sent the fans home happy with ‘Allez Allez Allez’, three times in a row.

“When you buy into the Liverpool game you buy into the whole day,” he explains. “Talking about songs you’ve heard that week, being together, turning those songs into football songs. When your with your mates and we’ve won and you go out and listen to music afterwards, that brings people together and that’s what this city is about. It’s a multicultural city, much like Dublin.

“A Dubliner is probably the closest thing you’re going to get to a scouser, let’s be frank about things. I think the cities in themselves are quite similar. When you walk around there’s a buzz there’s a chattiness, there’s the sport and there’s music everywhere. More so here even then in Liverpool which is great. It’s great to be here and we hope to make Dublin a regular thing because the demand for tickets was just ridiculous.

“I think people in the club are starting to get it now too, we’re keeping the Anfield heartbeat alive and we’ve got to stay true to this.”