Galway Plate to continue in evening slot despite attendance dip 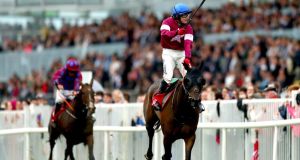 The Galway Plate’s new evening slot is set to continue and Horse Racing Ireland (HRI) is keen to try and stop the slide in attendance levels for the summer’s biggest steeplechase prize.

Last week the day three festival card was moved to an evening date in an attempt to reverse the continuous dip in crowd figures at the Galway festival’s Wednesday fixture over the last decade.

In 2008 there was an official crowd figure of more than 25,000. However, despite the initiative wet weather contributed to another drop last week with a reported attendance of 16,925.

Day five of the festival even topped the Galway Hurdle crowd of 26,429 and the rise in popularity of the festival’s Friday evening date in particular is a notable contrast to the Plate fixture.

The Galway authorities have committed to persevering with an evening Plate for two more years.

HRI’s director of racing Jason Morris does not anticipate any change to that policy and said he would be very surprised if the historic €250,000 Plate was moved to another day at the festival.

“We’re very flexible in relation to Galway, given the importance of the festival, and they obviously felt it wasn’t performing as they would have liked recently in the afternoon. So they moved to an evening this year.

“Obviously it was weather-affected, so I would imagine Galway will give it another year to see how it works,” he said.

However, the contrast to Friday’s continued growth in popularity is notable, prompting Morris to make comparisons to the final day of Punchestown’s spring festival.

“The Saturday is now the largest crowd at Punchestown. I think it got 35,000 this year and it’s the weakest day’s racing of the five in reality. You could say it’s the same phenomenon [at Galway].

“But I would be very surprised if Galway wanted to move away from it [running the Plate on the Wednesday]. It’s traditionally such a strong day for them and they want to try and grow it back to its previous popularity.

“The Thursday is very successful. The Friday is now similarly successful. The Monday and the Tuesday have picked up hugely in recent years. So the key target is to try and restore the Galway Plate to its historical heights.

“The weather really did mitigate against them this year. But we will continue to work with them to get it back to where it used to be,” Morris said.

In other news, Sergei Prokofiev looks set to be the Ballydoyle standard-bearer in this Sunday’s Keeneland Phoenix Stakes at the Curragh as Aidan O’Brien pursues a staggering 17th victory in Europe’s first juvenile Group One of the season.

The champion trainer has nominated Prokofiev as a likely starter this time, along with other possibles such as Fairyland and last week’s Richmond Stakes winner Land Force.

The €250,000 feature could see Prokofiev clash again with the Martyn Meade-trained Advertise. He was a place ahead of the Irish colt when runner up to Calyx in the Coventry Stakes at Royal Ascot.

Advertise has since won the July Stakes at Newmarket and Meade said subsequently: “We’ll go over and take on Mr O’Brien and see how we get on. He won well at Newmarket and I think he deserves to step up to Group One level.”

O’Brien was out of luck in Sunday’s Prix Maurice de Gheest won by the home filly Polydream but he unveils an intriguing trio of two-year-old newcomers at the Curragh’s bank holiday Monday opener.

Blenheim Palace is a brother to both Churchill and Clemmie, while Sydney Opera House is a half brother to the Melbourne Cup hero Rekindling. For good measure Barbados is closely related to the Guineas hero Saxon Warrior.

It’s a formidable team on pedigree although this time at least experience could work in favour of Jim Bolger’s Cruciatus.

Chicas Amigas has first-time cheek-pieces for the juvenile conditions event, while at Cork’s National Hunt fixture Willie Mullins unveils some pedigree royalty of his own. Buck’s Billionaire is a half brother to the legendary Stayers champion Big Buck’s.

1 Seán O’Brien: Anger over my parents’ break-up never left me
2 Madness or defiance? The GAA is taking a huge gamble in staging Championships
3 Plenty of positives for Farrell as Ireland hit the ground running
4 Sportsman to statesman, Marcus Rashford is a ray of light in the darkness
5 Will Connors chops his way to the front of Ireland’s openside queue
Real news has value SUBSCRIBE
Crossword Get access to over 6,000 interactive crosswords