Cork City eye top of table as they travel to Waterford 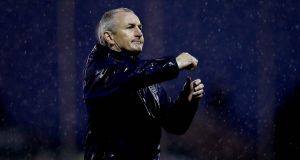 Cork City Manager John Caulfield can guide his team back to the top of the league. Photo: Ryan Byrne/Inpho

A win in Waterford would take Cork City back to the top of the Premier Division table on Friday evening although the stakes are high for the hosts too with Shamrock Rovers just a point behind Alan Reynolds’ side now and Derry City not to far off either.

Waterford won the last league game between two sides at the RSC and yet never quite seemed to recover from the sendings-off and suspensions that marred the game’s closing stages. The 2-1 victory gave the newly promoted team 21 points from their opening nine games but they managed just 23 from the 18 played since and come head into this evening’s encounter with Dave Webster (suspended) or Cory Galvin (knee) looking to bounce back from two straight defeats.

City, by contrast, have lost one in seven league matches since the two sides last met at Turner’s Cross at the start of June although Caulfield knows that, having played more games than title rivals Dundalk, his side really has to keep on winning.

“We are getting to the stage in the season where we need to keep picking up three points to keep the pressure on,” he says. “They have brought in five or six players in the last month (and) it has given them a much stronger panel, so I expect the game on Friday to be tough and exciting. The most important thing for us is that we have to be ready for it.”

Derry, meanwhile, face Sligo Rovers without Nicky Low, who is injured, Eoin Toal, who is suspended, or Rory Patterson who has left the club to sign for Irish League outfit Crusaders. The 34-year-old had seven league goals for City this season but has clearly been a less central figure for them of late.

Rory Hale is back from suspension for the game while Rovers, now just two points clear of the play-off spot, have Seamus Sharkey suspended and Gary Boylan out long term. Adam Wixted is a doubt for the game having been involved in a minor car accident over the last few days.

1 College football turns blind eye to Covid-19 by risking players' health
2 In turmoil on and off the pitch: Where did it all go wrong for Barcelona?
3 Limerick’s Shane Dowling forced to retire at 27
4 Rugby impasse continues as no deal reached in fourth round of IRFU salary talks
5 The Best Of Times: Harrington stares down Garcia in epic Claret Jug battle at Carnoustie
Real news has value SUBSCRIBE