Michael Walker: Great expectations at Leeds as Bielsa warms to his task 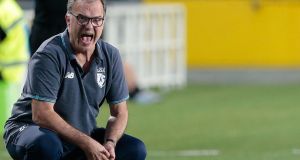 Marcelo Bielsa is the manager of Leeds United. It is a sentence worth repeating.

Almost two months after it became fact, there is still something surreal about the former manager of Argentina and Chile, the man Pep Guardiola calls “the best coach in the world”, walking into Elland Road and hanging pictures of Billy Bremner and Don Revie on his office wall.

But here is Bielsa, the latest in a long, long line of mainly unsuccessful successors to the great Don, preparing a Leeds team for a Championship opener against Stoke City on Sunday.

This man who led an Argentina squad featuring Pablo Aimar, Hernan Crespo – and Mauricio Pochettino and Diego Simeone – among others to the 2002 World Cup, has to think about combating new Stoke recruits such as James McClean. It is unusual.

It was Bielsa’s invigorating Athletic Bilbao who were applauded off Old Trafford having beaten Manchester United in the Europa League six years ago, a performance to convince anyone of Bielsa’s vision.

Since then there has been a fading away at Marseilles, Lazio and last season at Lille, where Bielsa’s time was over by November.

Those disappointments are why, at his Leeds introduction, he said his self-esteem “really suffered” and why yesterday, giving his first pre-match press conference, Bielsa said he was grateful for Leeds’s offer. He stressed “the history of the club, the importance of the club”. It will have its centenary in 2019.

Inside the building they have been impressed by this attitude.

Bielsa also mentioned “the project”, and while plenty are sceptical about such terms in football, at Leeds United there is ongoing change.

The club’s majority shareholder, Andrea Radrizzani, entered Elland Road, initially as a partner for the erratic Massimo Cellino in January of last year. Radrizzani took over in May, bought back the stadium and wants to build an academy on the land beside the ground. He has done good things in terms of restructuring the club, brought a 10 per cent investment from the owners of the San Francisco 49ers and clearly aims to re-establish Leeds in the Premier League.

There have been errors and misjudgments too, however. Rebranding the Leeds badge with a forearm across it was an image too far, then there was the end-of-season trip to Myanmar, as the government there inflicted a form of apartheid on the Rohingya population.

That was about a television deal – Radrizzani owns the Eleven Sports Network which has secured La Liga and Serie A rights in Ireland and the UK this season. He understands profile: capturing Bielsa for Leeds United only enhances Leeds United’s.

For now, Bielsa feels more than just another manager in just another dugout. He is, according to one of the San Francisco investors, here to transform the “culture”.

It has started. Bielsa has taken a pencil to the plan of the club’s rural training ground. There is also his coaching staff, not small, and a commitment to training which has meant double sessions on most days. Famously his methods are intense mentally and physically and there has been some burn-out among his previous teams.

To cope, Leeds players have stayed in nearby hotels to recover and be ready for the next session.

All of which requires investment. This is ambitious. Yet while money has been spent in places, nervous Leeds fans note the absence of equivalent excitement in the transfer market. Barry Douglas from Wolves and Patrick Bamford from Middlesbrough have been acquired, but Ronaldo Vieira has been sold to Sampdoria, one of a dozen departures. The books are nearly balanced. This is not Wolves of last season.

Bielsa’s “protagonist” style – he used the word again yesterday – is about dominating the ball in the opposition half. He has turned a midfielder, Kalvin Phillips into a ball-playing member of a back three, yet he will want to see Phillips further forward.

Whether it all works or not is another matter, but the figure Pochettino calls “my football father” has thrown himself into the club and the area. He has given his first mass address to the squad in English.

Bielsa turned 63 two days after sitting in the dugout at York City. Bootham Crescent, built in 1932, is a quintessentially old English ground and York had burly striker stone Jon Parkin up front and a ‘Trialist’ scored for them.

Bielsa may have looked around and wondered if Trialist is a Yorkshire name or a reference to the Leeds managerial experience.

At another pre-season game, he was spotted with a DVD copy of Kes, with its famous Brian Glover-Bobby Charlton scene.

The manager Bielsa replaced, Paul Heckingbottom – from Barnsley – could tell him all about it. And about a Leeds squad which was top of the Championship after seven games last season but which finished 13th and lost coach Thomas Christiansen along the way.

This is Bielsa’s new on-pitch reality: Leeds won just four games after the New Year. They looked lightweight at times.

To turn that around would be something and Bielsa would be due plaudits.

But it is a task in a demanding division and as the first whistle beckons, there is a surge of excitement and nerves around Elland Road. Supporters do not know whether this is inspired, doomed or bizarre – or all three.

Gjanni Alioski, one of last season’s squad and retained by Bielsa, tried to offer certainty on Thursday.

“We’re ready,” he declared to the Yorkshire Evening Post, “and with how we train, we’re ready to explode. We’re like a bomb.”

Bielsa and Leeds might have preferred the term: controlled explosion. The Championship awaits.