Celtic’s title defence off to a winning start against Livingston 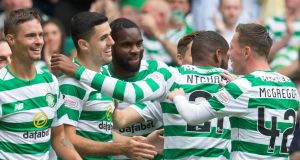 Celtic began their quest for an eighth successive Ladbrokes Premiership title with a convincing 3-1 home win over newly-promoted Livingston.

Brendan Rodgers’ side are in the middle of their Champions League qualifying campaign and they host AEK Athens in the first leg of their third qualifier on Wednesday night.

However, on the day 68-year-old Celtic great Danny McGrain unfurled the league flag before the game to loud cheers, the Hoops looked focused and hungry enough to continue their domestic dominance, nothwithstanding the late blip.

Amid flag day excitement, Celtic fans were happy to see Jonny Hayes make his first competitive appearance in more than eight months after recovering from injury.

Mikael Lustig and Rogic came in for their first starts of the season while Jozo Simunovic was reinstated after serving his two-game European suspension, with fit-again Leigh Griffiths on the bench.

The opening goal arrived in the seventh minute when a Hayes cross from the left found the head of Rogic, who nodded the ball past helpless goalkeeper Liam Kelly.

The reigning champions continued to dominate the ball although a rare Livi attack in the 20th minute ended with Scott Pittman volleying over the bar from the edge of the box.

Celtic’s second goal came from a Livi corner, Rogic racing down the pitch in a counter-attack before setting up Ntcham whose shot-cum-cross from 14 yards landed at the feet of Edouard to tap into an empty net.

As the Parkhead men operated in cruise control, Livingston player-manager Kenny Miller picked up a booking from referee Nick Walsh five minutes before the interval for an earlier challenge on Lustig.

Livingston’s problems increased when Walsh pointed to the penalty spot after defender Declan Gallagher challenged Callum McGregor inside the box and Ntcham slotted the ball past Kelly.

Livi’s goal remained under siege and the shots rained in, Miller cleared a Lustig drive off the line.

Around the hour-mark Griffiths came on for Edouard to make his first appearance of the season while left-back Kieran Tierney replaced Hayes, neither substitution offering any encouragement to the visitors.

Griffiths was denied by Kelly after he had cleverly latched on to a searching pass from skipper Scott Brown and then, in the 81st minute, the Scotland striker hit the post with an inswinging corner from the right — with Simunovic firing the rebound over the bar.

Livingston managed to repel a series of more attacks and attempts on goal and as they finished with a flurry substitute Jack Hamilton, on for Miller, headed just over the bar in the final minute before Robinson forced the ball past Celtic keeper Craig Gordon at the end to give the travelling fans something to cheer.