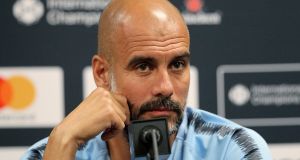 Pep Guardiola has warned Manchester City’s players he will be harder on them this season to ensure they become the first club in a decade to retain the Premier League title.

No club has won back-to-back Premier League championships since Manchester United in 2008-09, and the reigning champions at the start of the past three seasons – Chelsea, Leicester City and Chelsea again – have all failed to qualify for the Champions League the following year.

City finished runners-up in the seasons that followed their title victories of 2012 and 2014, but in Guardiola they have a manager accustomed to consistent success. He won three consecutive La Liga titles with Barcelona from 2009 to 2011, and a hat-trick of Bundesliga championships at Bayern Munich from 2014 to 2016.

Guardiola believes greater competitiveness in England’s top flight has contributed to the regular turnover of title winners, and last season’s record haul of 100 points will be impossible to repeat. But demanding even more of his players, Guardiola insisted before Sunday’s Community Shield against Chelsea, is key to keeping the squad hungry for silverware.

“I don’t know why,” he said, when asked why it has proved so difficult to retain the Premier League title. “I’ve had it in Barça and Bayern, and we were able to repeat it and win back-to-back. Here maybe it’s more complicated for the contenders – all the teams are good. That’s why maybe we should reflect with some more perspective on last season. Imagine if we had said at the start that we are going to make 100 points? Impossible. With perspective you realise how good it was. But the target now is what we have to do.

“I don’t know the hunger we have, I don’t have an answer, but I’ll try to repeat what we did at Barça and Bayern and be harder with my players. That’s the best way to describe it. After winning you can be ‘okay, we’re really good,’ and that’s the moment you start to go down.

“To be clear with them, the guys who are good, we’ll say they are good, and if they are bad, we are going to say they are bad. I try to be fair with what I see on the pitch, and off the pitch try to choose the right line-up and try to win games.”

City won the league with five games remaining last season, equalling United’s record from 2000-01, and Guardiola believes the successful pursuit of the 100 points total that followed bodes well for the forthcoming campaign.

“We won the league in advance and except one game here against Huddersfield, when we were so tired and didn’t play good, we were there. I don’t think about it too much, I just prepare for the next game and I see the players are more sharp and ready to play. I don’t think about January or February. The best game is the next one.

“Now it’s the Community Shield, and the players know I have prepared as though it is the most important final we have to play. I can assure you it will happen every single game. After that we will see if we are able to win back-to-back.

“I’ll be happy if we are there [challenging] in April or May. We cannot deny there are more contenders. Chelsea, United, Tottenham, Liverpool: they all have excellent players, and that’s why no team has won back-to-back in 10 years.”

The champions, who welcome back Kevin De Bruyne and Raheem Sterling from post-World Cup holidays after the Community Shield, secured the striker Gabriel Jesus on a new five-year contract on Friday. “I’ve never met a striker who fights like him for the team,” claimed Guardiola. “Thanks to Gabriel for trusting us and thanks to the club for keeping him. He’s so young and can improve.”

Guardiola was a declared admirer of Maurizio Sarri’s work before the Italian left Napoli for Chelsea this summer. Despite Sarri’s late arrival as Antonio Conte’s replacement, the City manager believes the 59-year-old has already imposed his ideas on the Chelsea team and will make them title contenders again this season.

“First of all I’m happy a manager like that is here in England, ” said Guardiola, who dined with Sarri in Italy this summer at the request of Arrigo Sacchi. “I will learn a lot from him because I can see him every weekend. Last season it was more complicated to see him. We are going to improve because of his ideas.

“I’ve seen three games [by Chelsea in pre-season] and he gets it. The team already in a short time plays like he wants. He needs more time, but his ideas are already there. It’s going to be a good game. Chelsea will be a big rival; they always are. I think he will be perfect for English football.”

1 The unsolved mystery of Goran Ivanisevic’s stunning Wimbledon win
2 The Game Changers: Vincent O’Brien, a pioneer who took Irish racing to the world
3 Tipping Point: DeChambeau’s transformation raises questions, but who will ask them?
4 Dan Carter to return to Christchurch as an Auckland Blues player
5 José Mourinho: Half-time row between Son and Lloris was ‘beautiful’
Real news has value SUBSCRIBE