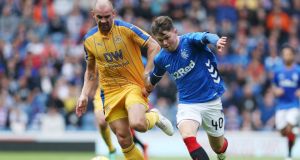 Darron Gibson in action for Wigan Athletic against Glenn Middleton of Rangers during a pre-season friendly at Ibrox Stadium on July 29th. Photograph: Ian MacNicol/Getty Images

Republic of Ireland midfielder Darron Gibson will get a chance to rebuild his career at Wigan Athletic after signing a short-term deal at the Championship club.

The 30-year-old from Derry has been without a club since having his contract terminated by Sunderland in March following his arrest on St Patrick’s Day after he drove his Mercedes 4x4 into a taxi and five parked cars.

A roadside test recorded him having 105mg of alcohol per 100ml of breath – reduced at the police station to 95mg – when the legal limit is 35mg.

Gibson was sentenced to a two-year community order with 250 hours of unpaid work, including 30 days of rehabilitation activity, had to pay compensation to one of the drivers and was banned from driving for 40 months.

At the time of his court hearing in May, Gibson had expressed his wish to continue his career and Wigan boss Paul Cook have offered him a short-term contract at the DW Stadium.

The former Sligo Rovers manager Cook said: “Darron is a talented footballer, who has played at the highest level and is a good addition to our squad.”

Wigan get their Championship campaign underway at home to Sheffield Wednesday on Saturday.