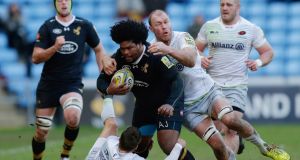 Wasps hooker Ashley Johnson has been provisionally suspended by the Rugby Football Union after failing a drugs test, the English Premiership club said.

The 31-year-old, who has three Test caps for South Africa, is accused of testing positive for a banned substance in an out-of-competition test.

Johnson’s last appearance for Dai Young’s team was in the 24-16 Premiership win over London Irish on March 4th.

“The club is aware that a prohibited substance was reportedly found in an out-of-competition doping control sample provided by Ashley Johnson on February 7 2018,” Wasps said in a statement.

“He has been provisionally suspended by the RFU pending final determination of the matter and is therefore currently unavailable for selection.

“Ashley is currently investigating the possible source of the substance and both he and the club are co-operating fully with the RFU in this respect.”

Johnson joined Wasps in 2012 and agreed a contract extension with the club last November.