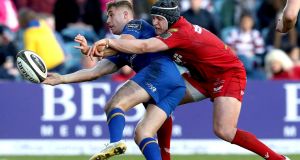 Coaching is an alchemy of sports science and art. In the 25 years I have been coaching senior rugby, the science of coaching has improved but the art of coaching has regressed. There are a lot of, what I term, YouTube coaches rehashing others’ ideas.

They see a play on the internet, then copy and paste the ideas. Creativity and original thinking has diminished. Many coaches appear to struggle in developing attacking strategies that target their opponents’ weaknesses.

Every week we see lots of the same plays and structures in every team across Europe.

Today’s Champions Cup semi-final at the Aviva is the exception.

Alleluia and praise the rugby gods. It is a festival of running rugby.

Leinster and the Scarlets have delved into rugby’s past to reignite some proven attacking tactics to lift their modern attacking game and challenge fast, flat-line defence.

Both teams’ attacking strategies start with the very sound coaching premise that you should “give your opposition what they don’t want”. Both are dishing up brilliant attacks that can pull apart a well-organised defence.

Leinster and the Scarlets have attacking rugby deeply ingrained into their collective DNA. Traditionally, both clubs play an exciting ball in hand game. That is why they are in the semi-finals.

Good attack is special because it is difficult. If it was easy everyone would do it. Coaching fitness and defence is easy. It only takes time and effort to be fit; skill is not required. Defence takes a few skills and loads of aggression. The art of creating space then attacking that space, is what separates the excellent from the average.

The respective outhalves, Dan Jones and Jonny Sexton, will take the ball to the defensive line. They are playing gainline theory. Start flat, take the ball at pace and run at the defence. This puts huge pressure on the tacklers and stops them from rushing and sliding. The outhalves and ball carriers are surrounded by support players, coming at pace, at a variety of angles. That asks questions of the defence and creates opportunities for the close runners. More importantly, it also creates space for the wide attack, as the inside defenders must hold on the ball carrier and cannot slide.

Gainline theory is not new. It was conceived by a few brilliant minds in the 1927 Waratahs, but it remains the basis for all successful close attack.

Both teams have developed superb offloading games. It is a joy to watch. To put it simply, offloading in the tackle shatters defensive systems because it can not be stopped by a single tackle. By its very definition offloading means the defender has made the tackle, but the skill and the precision of the ball carrier and his supporting player, empowers them to pass out of contact and continue the attack behind the single parallel line of modern defences.

Today’s defensive systems do not have the scrumhalf sweeping behind the line as a secondary cover defender. As the world copies the New Zealanders’ attacking structure of playing the forwards across the field in a 2-3-3-2 formation, the number nine has been pushed up to fill the field.

So what does that tell us? Modern “D” lines have put all their eggs in one basket and baby, there is acres of space behind that line. Break the line or get behind it and it’s happy days, daylight, wide open spaces, more than the rivers are running free here. How do you break the line? Coach your team to offload. How do you offload? Teach your forwards footwork and your support players to attack the ball and run at the hole.

How long does it take to develop the skills required to offload? – and here is the crunch – a long time.

Long-term athletic development is like a pension. The more you put in and the longer you have it, the more you will get out the other end. The fact is, it takes a minimum of 36 months to get a team attuned to the skills required for a powerful offloading game.

Both clubs have invested in upskilling their players and it is paying off. The work done in 2015-16 is being rewarded now.

In particular, the Leinster forwards are using footwork to get into the space between the defenders, forcing a one-man tackle. This frees their hands to pass to a supporting player who is attacking the ball, because the space is where the ball is.

It is simple and it is beautiful but it is not new. Jean-Claude Skrela and Pierre Villepreux, the genius French coaches from Toulouse and the fathers of coaching continuous attack through offloading, would be proud. There may be nothing new under the rugby sun but it remains a pleasure to watch and a joy to play.

This match has the feel of a special day at the Aviva. Two giants of positive attacking rugby, going toe to toe, in another chapter in an unfolding rivalry.

Leinster want to get square for the pain of the past and the Scarlets know they can win in Dublin.

In the world’s great sporting competitions, the semi-finals often produce the best and most dramatic of games. Strap yourself in because this one should be an absolute belter.

Irish sporting bodies warn Oireachtas of catastrophic financial effect of Covid-19 13:38
Dermot Desmond: Covid could force Premier League rethink on Celtic and Rangers 13:24
Cooney in but Coetzee out as Ulster travel to Toulouse 12:37
Johnny Sexton returns to captain Leinster against Saracens 12:23
Solskjaer scathing of England’s handling of Mason Greenwood 11:57
Crossword Get access to over 6,000 interactive crosswords