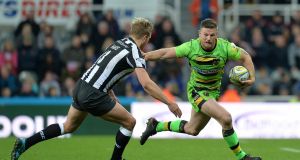 Northampton’s Australian international Rob Horne has been forced to retire from the game at 28 after suffering nerve damage to his right arm in a tackle during a game against Leicester last weekend. Photograph: Mark Runnacles/Getty Images

Northampton’s Australia international centre Rob Horne has been forced to retire from rugby after suffering career-ending nerve damage to his right arm.

The 28-year-old was hurt in the first minute of Saints’ Aviva Premiership game against Leicester last weekend, being carried off following lengthy on-pitch treatment.

And Northampton have announced that Horne will not play again following tests with leading neurological consultants at the Royal National Orthopaedic Hospital in Stanmore.

“This is absolutely tragic news and has been devastating for every member of the squad and staff here,” Northampton interim head coach Alan Dickens said in a club statement.

“All our thoughts are of course with Rob and his family at this time.

“Rob is not only a world-class rugby player, but he is an exceptional man.

“He is a hugely respected and popular member of the dressingroom, and this will be an enormous loss to Saints, both from a rugby and a personal perspective.

“Even though he had only been here for one season, I am sure he was destined to become a club legend and, like everyone, I am deeply saddened that his career has been prematurely ended in this way.”

He scored eight tries in 21 games for Northampton, and captained them in the Leicester match.

Saints chief executive Mark Darbon added: “Rob has been the ultimate professional in his time at Franklin’s Gardens, and shone on the pitch in what has been a difficult season for Saints.

“This news has shaken everyone at the club, and I am sure all of our supporters will join us in sending our best wishes to Rob, his wife Simone and their two young children.

“Rob will always be a part of the Saints family, and we will, of course, do everything we can to help him through his rehabilitation and transition in to the next stage of his life.

“On behalf of the club, I would like to thank all the medical staff who have helped Rob so far, in particular the diligence and professionalism shown by the Saints and Tigers medical teams, who reacted quickly and could not have done more for him from the moment his injury was sustained.

“Rob has asked me to pass on his deepest gratitude for all of the messages of support he and his family have received, but would now like everyone to respect his privacy while they deal with this news.”