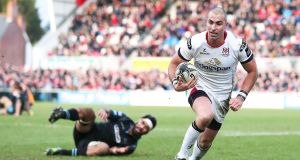 Ruan Pienaar runs in for a try against Glasgow Warriors. Photograph: Darren Kidd/Inpho/Presseye

Although he has been unable to train so far this week with the back spasm that forced his early departure in their season-ending defeat away to the Ospreys last Saturday, Ulster are hopeful that Ruan Pienaar will be fit to make his 141st and last appearance for the province against Leinster at the Kingspan Stadium this Saturday. Given the nature of his departure, it promises to be more than a little poignant.

“He should be fine,” said head coach Neil Doak, who is also being released at the end of the season, thereby ending a 20-year association with the province. “His back went into spasm right at the end of the warm-up. He tried to get through it, but you can see quite clearly he was struggling a little bit. He could not get up to full speed. With those injuries, 48 hours later, it can settle quite quickly. He has not trained these first couple of days so we remain hopeful he will come through for the weekend.”

The 32-year-old Pienaar, who was due to attend yesterday’s media briefing but was unable to do so, has expressed his disappointment that the IRFU, and specifically its high-performance manager, David Nucifora, has ended his six-year association with the province. It is where his wife, Monique, gave birth to their two children, Lemay and Jean-Luc.

Last October he said: “Because I have been here for so long, I think some people might have thought this would never happen. That was certainly the case for me. I didn’t think it would be a problem because this has been home to me for six years.”

“I went to Bryn [Cunningham, Ulster operations director] after the semi-final [last season] and it was the first time we really talked about negotiations. I said I would like to stay, and I think the feedback from the IRFU was fairly negative from the beginning. From there onward I knew it was going to be tough to stay.”

Return to the North

Pienaar has spoken of returning to Belfast and Ulster some day. Although questions have been asked whether Ulster did everything in their power to keep the talismanic figure, they assuredly did, and in any event the final say rests with the IRFU. For sure Nucifora has to think of long-term succession planning for indigenous Irish players, but Pienaar’s treatment is no reward for loyalty, and it seems a waste of someone who could have helped develop young Irish scrum-halves.

“That is well above my pay grade – that is committees and stuff like that,” said Doak when asked about the off-field negotiations that culminated in this controversial decision. “You have got to remember all the provinces are feeder systems to the national system. There are a few countries trying to model themselves on the [Irish] national system. There will always be pros and cons across the board for whatever policies you have. Ideally Ruan would have loved to have stayed and I am sure Ulster would have loved him to stay, but the things are in place to try and make sure indigenous players are coming through at an accelerated rate under that policy; they have got to abide by that.”

Ulster need a mathematical miracle – a five-point swing in match points and 73 in points differential – over the Ospreys to make the play-offs, thus ensuring something of an anti-climactic farewell for Pienaar and Doak, who also expressed his desire to stay.

“I am obviously disappointed I am going,” Doak said yesterday. “It is out of my control and I would loved to have been staying around. I have been here 10 years and put a lot into this, and that is one of the reasons why it has been unbelievably frustrating for the last 18 months. I think from my point of view, to help develop some of the players that have gone to play international rugby and hopefully for the British Lions, and from a personal point of view delighted to be a small part of their journey . . . I never really saw it as a job, it was a way of life for me, and as coaches you are there to help your players. You are there to help them develop achieve their goals and aspirations. Ultimately all of them are trying to play at the highest level they can. If that is Lions, international, if that is Provincial, that is what they are trying to do. To be a small part of that for a number of years – it has been superb for me and I hope the players have enjoyed it as much as I have.

“I have loads of fond memories coaching here, and I have been around for a while and I have seen players 16-18 years, working with them, so it is disappointing it is coming to an end.”

On another sad note, Stuart Olding’s season and hopes of making Ireland’s summer tour appear to be over after he sustained a significant left ankle injury last Saturday, and he will see an ankle specialist on Wednesday to decide on further management.