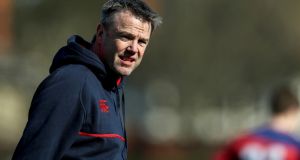 Andy Wood: “We have guys who have been there [Clontarf] since they were four or five years of age, playing all the way through.” Photograph: Tommy Dickson/Inpho 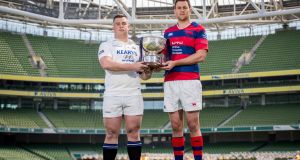 Andy Wood’s curriculum vitae since taking over for a second spell as head coach of Clontarf in 2011 – he previously served as captain and player – brooks no argument in debating the influence this son of Wellington has enjoyed in shaping the fortunes of the north Dublin club.

Last season Clontarf won a second Ulster Bank League Division 1A title to go with their first in 2014, while also finishing runners-up twice, during Wood’s tenure. On Sunday they will contest their fourth final in succession, a reprise of last season’s epic that culminated in a 28-25 victory over Cork Constitution.

The New Zealander has consistently managed to juggle and blend disparate ability and availability within the playing roster while maintaining in recent years a relentless annual push towards the final. It’s a better than fair accomplishment.

Clontarf are hoping Leinster secondrow Mick Kearney, hooker Bryan Byrne and academy prospects Conor O’Brien and Jack Power will all be available for Sunday’s final but, for Wood, club rugby’s showpiece is equally about the players from the parish, lifelong constituents of their club.

“We have guys who have been there [Clontarf] since they were four or five years of age, playing all the way through. Having them represented on days like Sunday is important as well as showcasing guys who go on to play for Leinster or the academy. I think it is a good showcase, great for the club game and community-based clubs in particular.”

So what’s the secret of Clontarf’s success?

“I’d say there is a bit of luck involved in it. We’ve managed to hold on to a lot of quality players through the years and have managed to attract players who want to come to Clontarf.

“The minis and the youths are inspired and stick with the game. They play through the U-20s and then they want to get into the firsts. There is that culture of success. If we’re making finals then lads want to come through and be a part of it. That’s huge,” says Wood.

“I know there is traditionally a drop off after kids leave school so there is a lot of work going into our 16s, 17s, 18s, 19s and 20s and really building up a depth of players who can then come into the senior squad. That’s a lot of hard work from a lot of different people in the club. That would be the number one reason.

“To be honest, the one thing I found, players who come into the game and want to play with Clontarf at that level, some of them just want to represent Clontarf to the best of their ability.

“Others are coming from the Academy so that’s their vehicle to show their talents. That gets sent onto the Academy and they can review it.”

Wood concedes the game has changed appreciably since the days when he togged out in the team. Players are fitter, in better shape year-round, and the mix between aspiring professional and those with no ambitions further than the club boundaries raises the standards of all.

In the build-up to last year’s final Wood spoke about a certain Joey Carbery and again in the aftermath after the Leinster and Ireland outhalf-cum-fullback’s mesmeric performance. The New Zealander said Leinster would soon come calling and so it proved, Ireland too.

“It is days like Sunday that count. If we hadn’t got here, would people be talking about Joey Carbery?”

Sunday’s final is a time for others to shine; the pathway has already been illuminated.