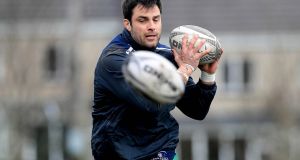 Prop Ronan Loughney will leave Connacht at the end of the season. Photograph: Donall Farmer/Inpho

Prop Ronan Loughney is among a group of players leaving Connacht at the end of the season.

The 32-year-old spent 12 years at the Sportsground and played 191 times for the province. He won his one and only international cap as a replacement for Declan Fitzpatrick in the 42-10 loss to New Zealand in the first Test in Auckland in 2012.

Reflecting on his Connacht career, Lougney said: “I have had an amazing time with Connacht and am grateful to have had the opportunity to represent my home province on so many occasions. The last 12 years have been a dream come true and I am incredibly proud of what the club has achieved.

“I would like to say a huge thank you to all the great team-mates, coaches, management and staff that I’ve had the privilege of working with over the years. I’ve had the honour of playing alongside a remarkable group of players who have also become close friends.

“I would also like to thank our wonderful supporters who have stood by us through thick and thin and have made the Sportsground the fortress it is today. Thanks for your incredible support down through the years.

“I am excited for the future and the next challenge. And will forever cherish my time with this great club.”

Connacht chief executive Willie Ruane paid tribute to those players departing in the summer, saying: “On behalf of everyone in the Connacht Rugby organisation and around the province I would like to thank and pay tribute to each individual that will depart the club at the end of the season.

“Some guys have been here longer than others and have played in more games but we are grateful for the commitment and hard work put in by every individual in the squad throughout the year.

“It would be hard not to give a special mention to Locks [Ronan Loughney] who has given so much to Connacht Rugby over the years. He epitomises the core values of not only Connacht but also rugby. He is a credit to his family and to the West of Ireland and he will be sorely missed around the Sportsground. I know that he is hugely proud of the province and he should be so proud of his own contribution to all that is good about Connacht Rugby.

Meanwhile, Ulster backrow Clive Ross, lock Alan O’Connor and scrumhalf Dave Shanahan have all signed contract extensions that will keep them at the province until the summer of 2019. Hooker John Andrew has agreed terms to stay until 2020.

Commenting on the announcement of the contract extensions, director of rugby Les Kiss said: “We are delighted that the four boys have committed their immediate future to Ulster. As we continue to build our playing roster it is critical that we have depth across these key positions, so this is another important piece of business for us.”