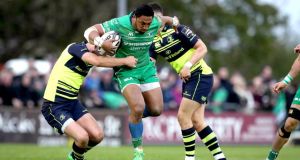 Bundee Aki in action against Leinster in the the Guinness Pro 12 game at The Sportsground in Galway. Photograph: Ryan Byrne/Inpho

Connacht centre Bundee Aki will face a disciplinary hearing on Thursday “as a result of his behaviour to and remarks directed toward, referee Ian Davies, during and immediately after” the recent Guinness Pro 12 game against Leinster at the Sportsground.

The New Zealander has been formally charged with misconduct by the disciplinary officer and will face a disciplinary panel meeting in Cardiff consisting of Roger Morris and Simon Thomas (both Wales) via video link.

Davies asked Connacht captain John Muldoon to inform Aki about his constant querying of the referee’s decisions during the 37-24 derby defeat and later told the player that he was ready to send him off it continued.

Aki is charged under section three of the tournament’s disciplinary rules and could face a fine/and or a suspension if the misconduct complaint is held up.