Sexton determined to Play On, Plan C and D, word of mouth and by the numbers 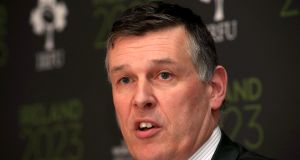 IRFU CEO Philip Browne gave a grim outlook for the financial aspect of sport in the country. Photo: Dan Sheridan/Inpho

Philip Browne has been IRFU chief executive for 22 years. A big deal gets made about his public comments, like describing the 2007 World Cup catastrophe as a “blip,” mainly because such flippancy is rare.

Browne, a rower by sporting trade, is the epitome of the steady hand on the tiller. That is why the 59-year-old’s warnings since the pandemic took hold must be taken as deadly serious.

Browne has sugarcoated nothing. Two months ago he forewarned of a financial crisis that could decimate professional rugby on this island. The lack of clicking turnstiles remains on course to devour the €25 million sale of Newlands Cross and burn through the €5.59 million first instalment of CVC’s investment in the Pro 14.

The CEO told us on Friday that the centre cannot hold without 50,000 supporters entering the Aviva stadium at least five times a year and, failing the sight of English and French milling around Ballsbridge come the 2021 Six Nations, €30 million will go up in smoke.

Browne was crystal clear: the Irish Government needs to bailout the IRFU, the FAI and the GAA in a similar fashion to how the banking industry was propped up in 2008.

Unfortunately, the root of this problem lies in Westminster. Unlike the Irish provinces return to play roadmap, English clubs have no clue when they can resume training. “It’s a mess,” said one insider.

International rugby can only return to Dublin when Boris Johnson’s deeply unclear, bumbling regime gets a handle on the coronavirus. Remember the sight of Boris at Twickenham on March 7th rubbing palms with as many people as he could and boasting about it afterwards?

That international rugby’s return to Dublin appears reliant on Johnson’s miraculous transformation from buffoon to world leader indicates Browne might need to reveal the “Plan B” or “Plan C” he spoke about last week.

“It is not sensationalist to suggest that without Government financial support, sport will take a generation to get back on its feet, leaving an enormous void at the heart of communities throughout the land.” – Philip Browne, IRFU CEO.

Everyone needs to see Plan C and D

The Offload has seen the blueprint Irish rugby players and coaches are working off. It is as encouraging as it will be difficult to pull off.

The good news is Leinster versus Munster at the Aviva Stadium on August 22nd. Despite a few rusty bodies we can expect a derby game for the ages. Nobody will forget the sound of Johnny Sexton and CJ Stander – if he gets a flight back from South Africa in time – roaring for the ball.

The interpros are Plan B but the novelty of player yelps in empty stadiums will eventually wear off. Playing devil’s advocate, what does Irish rugby do if the proposed “autumn Six Nations,” as well as Pro 14 and Champions Cup games are blocked by a 14 day quarantine rule for travelling squads?

Finding a way around quarantine laws that exist outside of Ireland may force a rapid promotion of Plan C. People deserve to know what this looks like. Insurance companies could make the ultimate call, but did someone whisper an all-island, all-professional club competition? If ever a restructuring of the overall plan can happen, now is the time.

Meanwhile, near Orlando Florida, the NBA is set to create the first truly sporting bubble on the 220 acre ESPN Wide World of Sports campus inside the Walt Disney Resort (Disney owns 80 per cent of ESPN). Maybe that is Plan D and all roads lead to Abbotstown.

€33.56 million: The IRFU will receive this sum from CVC over three years after purchasing of 28 percent of the Pro 14.

Sexton determined to Play On

Johnny Sexton was dreaming of fairways. Nobody could blame him while listening to caddy and author Colin Byrne tell tales from the majors at the IRFU’s Analytica conference. Zoom host Vinny Hammond even highlighted Sexton’s golf bag visible in the background.

However, an afterlife on the Pro-Am circuit with Brian O’Driscoll and Paul O’Connell is on hold for as long as possible.

“I’m reading a book called ‘Play On [The New Science of Elite Performance at Any Age,’ by Jeff Bercovici], which Mick Kearney gave to me, the old Irish team manager who’s back currently, he’s sort of part-time team manager now.”

(Side note: Andy Farrell brought the highly respected Kearney back into Ireland camp, after Kearney passed the baton to the less visible Paul Dean for the end of Joe Schmidt’s reign, but his role was described as an advisor to players seeking to transition out of the professional game. Sexton confirms that Kearney is in fact doing what he does best – expertly managing individuals.)

“It’s all about how all the top athletes played on until their late 30s early 40s and I’m reading it like the Bible at the moment and taking in every bit of it,” said Sexton of the book that looks at miraculous late career feats by Tom Brady, Serena Williams and others. “My wife’s trying to throw it in the bin every chance she gets . . . I definitely, definitely don’t want to retire any time soon.”