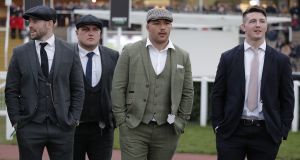 English rugby players posing at Cheltenham in Peaky Blinders garb may become one of the regrettable yet iconic images of this sporting age. There is Ellis Genge, Elliot Daly, Tom Curry and Jamie George looking all dapper as the rational thinking world looked on in horror.

Most of the 6,000 word interview with former Ireland schools centre Cillian De Gascun made it into last Monday’s newspaper. However, one question can be raised from the cutting room floor: what lessons should Irish sport learn from the horse racing festival last March to ensure similar decisions do not happen on the other side of this pandemic?

“I have to say, not necessarily in an official capacity, but I couldn’t believe Cheltenham went ahead,” said Dr De Gascun, the virologist advising the Irish government. “It wasn’t our decision, it was a UK decision. That made no sense at all. We had cancelled St Patrick’s Day [on March 9th].

“The first high profile decision that was made here was the Italian game in Dublin during the Six Nations, but that was one of the more straight forward decisions because of the affected area in Italy and rugby being the sport in that part of the country.

“Then Cheltenham went ahead. The mind boggles. Those sort of decisions in hindsight are really difficult to explain. There is no gain from letting them go ahead.”

The Guardian reported on April 21st that mortality figures in Gloucestershire hospitals, which covers Cheltenham, recorded 125 deaths, roughly double that in Bristol (58), Swindon (67) and Bath (46).

“What are the lessons? Mike Ryan in WHO has been quoted: ‘Speed trumps perfection.’ If you wait to be certain you’ll never act at all. The key is to act quickly and act decisively.

“I’d rather look back in a couple years time and say ‘well, maybe we pulled the trigger too soon rather than ‘well, we missed the boat on that.’”

The government’s green light for sport to return, between May 18th and August 10th, raises multiple concerns about physical distancing. If the race to return becomes a stampede, the disease may prove worse than the cure after all.

We have to keep dreaming about rugby’s return. Eventually a fully loaded interpro series – emasculated in recent years by Ireland camps – will be rolled out. They’ll need a trophy. The BOD Cup perhaps, or even better, the Axel Shield.

It will mean everything to the players because it will be the only rugby on the horizon.

With no Test matches any time soon, the IRFU will need something else to get Andy Farrell and his Ireland coaching crew under the sort of pressure they must be craving.

Or, and this would be interesting and risky in equal measure, bring back Joe Schmidt to pit his wits against former assistants. Sure, he’s only up the road.

Let RTÉ, Eir, TG4, Virgin and even YouTube scrap over broadcast rights. Lather on the hype by making James Ryan captain of the Possibles to Sexton’s Probables.

The national trial used to matter above all other matches. Due to the highly political selectors system, it was the opportunity that came along once, maybe twice in an amateur career.

It could be Rob Kearney’s swansong. It would generate no little debate. It is some way off, but consider they must.

Midi Oympique – the French rugby bible – is reporting a potential boycott of European rugby if their clubs do not get eight spots in next season’s Champions Cup. The argument is based on EPCR still hanging on to the ever decreasing hope that the 2020 knockout stages will ever be completed.

At the moment only six French clubs automatically qualify. With all sport banned in the country until September the Top 14 are already planning for next season. The Pro 14 and English Premiership refuse to fall on that sword (they are clinging onto the delusion that cross-border games will be safe before a vaccine).

Midi are even reporting the “Celts and English” are seeking to resume their leagues on June 20th. Don’t know where they got that idea from. Don’t believe everything you read in the bible. But the threat of a boycott seems very real.

8: French clubs are seeking to be allowed compete in the 2021 Champions Cup.

“We are conscious that people are concerned about the outcome. It is important for us that we make sure anything in the anti-doping area has been completed appropriately and in accordance with all the regulations, that would be the context we are looking at it.” – Dr Una May on the potential for Sport Ireland to appeal the James Cronin doping violation decision.