Allegations of homophobia made against Fijian chairman seeking election 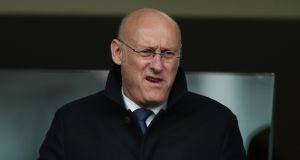 That it requires fresh allegations to stop World Rugby glossing over the fact that a convicted killer sits at their top table raises all sorts of moral and ethical concerns.

The Sunday Times heard and published a “graphic recording” of the chairman of the Fijian rugby union, Ratu Vilikesa Bulewa Francis Kean, using violent and homophobic language in his role as head of the Fiji prison service.

This developing story feeds directly into the election campaign for chairman of World Rugby as only last week the French Federation, led by Bernard Laporte, backed Kean’s nomination to the governing body’s executive committee.

Laporte is running on Bill Beaumont’s re-election ticket, so the French support for Kean appears to have taken the Fiji vote away from Beaumont’s only rival, Agustín Pichot.

The “manslaughter” happened 13 years ago. It’s hardly a secret when the uncle of the groom is beaten to death by the head of the Navy at the wedding of the prime minister’s daughter.

In 2007 Kean received an 18-month sentence after being convicted of killing John Whippy. He is reported to have “punched and kicked” Whippy and was “dragged away but returned to kick him in the head”.

Kean has sat on the World Rugby Council since 2018 but barely a word was said about his past. Until now.

Naturally World Rugby are taking the new “allegations extremely seriously.” Bylaw 3f – which aims to “prevent discrimination of any kind” against a country, private person or groups of people – is about to get its day in the sun.

By the way, Laporte, and by association Beaumont, backing Kean is all part of an Anglo-French cordiale that would signal a northern hemisphere power grab to guide rugby into the uncertain 2020s.

Unless Gus Pichot turns the tide. Los Pumas’ greatest ever scrumhalf has a real chance now.

Rugby planning inside the bubble

Sport, when we see it again, will be local. How that can happen needs to be figured out before the penny drops watching the Barrett brothers loosen limbs for Taranaki.

In a world of bubbles the All Blacks are kings. New Zealand’s provincial league - the Mitre 10 - is a strong bet to be the first competition to safely return in 2020. That’s because their Prime Minister Jacinda Ardern has the country in total lockdown, with returning residents quarantined for 14 days.

As Professor Sam McConkey told The Offload, Irish sport will struggle to imitate the Kiwis due to “the good people of Northern Ireland.”

The likelihood is that provincial squads will restart rugby on this island but so long as the Republic of Ireland and the United Kingdom remain on different trajectories in the fight against Covid-19, Ulster travelling to Dublin, Galway, Limerick or return games in Belfast would only pose a fresh health risk.

“Within about two to three months of containment measures the British and us here could all be in a little bubble together, and then we could all go do our sports happily together,” said McConkey. “But you have to do it on an all island basis because the border from south to north is very, very porous, and sealing it off is genuinely impossible in my view.”

83 - percent Rugby Australia has trimmed off its payer wage bill.

“The reason we cannot be as stringent as New Zealand is the good people of Northern Ireland do not agree with each other, they have not agreed with each other for 100 years and they do not agree with us. So there is a political problem. There have been Nobel prizes won and lost by people trying to solve that problem, and still they are not agreeing with each other.” Professor Sam McConkey, head of international medicine and tropical health at the RSCI, points out the major obstacle for sport returning to the island of Ireland any time soon.

Leadership comes in many forms

Sounds like NBA Commissioner Adam Silver will come out of the upcoming Michael Jordan documentary - ‘The Last Dance’ - in a better light than what already shines off his straight talking dome.

There is a treasure trove of unseen Jordan footage from the 1997/98 season (think Living with the Lions). Turns out Silver, NBA head of entertainment at that time, secured Jordan’s agreement to let cameras roll in the locker room by telling him: “Neither one of us can use this footage without the other’s permission.”

Leadership comes in many forms. On the tightest of ships that tends to be silence. Philip Browne has spoken honestly about IRFU finances but, otherwise, the policy of say nothing until there is something good to say means the rugby eco-system - media, supporters, athletes, administrators - is largely inactive.

That feels like a big mistake. Thankfully the provinces are coming out of hibernation. Leo Cullen zooms into the lounges of rugby journalists this Monday lunch time. Stuart Lancaster follows next week.

“It’s a brilliant reset button for us as a race of people,” Connacht coach Andy Friend, the IRFU’s unofficial head of entertainment, told Gerry Thornley. “I feel, certainly here in the west of Ireland, there’s a uniqueness to the way you live here anyway.”

Friend’s simple yarn about collecting fire wood matters right about now. He’s making a connection to supporters who are beginning to forget what sport felt like. Leadership comes in many forms. The best version, particularly in crisis, tends to be visible and coherent. Now is not the time to be quiet.