Insurance scuppers Japan-based All Blacks, word of mouth, by the numbers and more 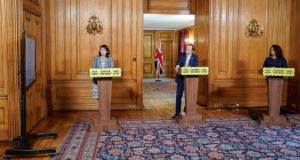 Press conferences with questions via video link, as seen here at Downing Street, may be the order of the day. Photo: Andrew Parsons/10 Downing Street/AFP via Getty Images

Journalism remains the first rough draft of history because reporters can get as up close and personal as social distancing allows.

Hopefully this penny drops before it is too late. Let James Gheerbrant’s first paragraph for The Sunday Times from Dortmund versus Schalke explain to rugby executives precisely why writers need to be included in the reopening of empty stadiums: “The oddest thing about football behind closed doors isn’t the spectacle; it’s the acoustics. The Westfalenstadion, the home stadium of Borussia Dortmund in Germany’s industrial Rhineland, is usually one of the noisiest places on earth. It’s a place of communion, of congregation, where on a raucous derby day, the noise levels crest well above 100 decibels. But the louder the noise, the more deafening the silence, and here, in front of rows of unmanned seats, it felt cavernous. Every blast of the referee’s whistle carried a shrill report. Every volley echoed like a thunderclap. Every shout sounded like a yell from the bottom of a canyon. Welcome to football in the time of coronavirus: a strange, sterile stage where every action has a new resonance.”

Gheerbrant’s “weird dystopian theatre” leaps off the page. but who’s going to describe rugby in such powerful prose? The answer, under current plans, is nobody. Well, plenty of potatoes will give it a rattle from the couch.

We nagged Martin Murphy, the Aviva stadium boss man, about rugby plans to lock out the 40 scribes included in the Bundesliga relaunch of football.

“The plan that we would have in place is for a virtual press conference like the Downing Street one,” said Murphy of a system that has been roundly criticised due to the inability to attain sufficient answers to hugely important questions.

If rugby authorities choose to pursue this idea, it will become the stick used to clatter them whenever the tiniest mishap is concealed.

“There is nothing definitive yet,” added Murphy. “These are drafted guidelines.

“We have looked at scenarios where journalists would be present. They would not be located on the upper deck, they would have be down on the lower deck in a secure area. There would have to be a lot of control over them coming in and out because every reporter is almost a sole trader, in that you are responsible for yourselves, rather than sitting under some controlling entity, and it was felt that there was potential risk in the numbers that are coming in and the ability to vet people.

“But this will be discussed with the Department [of Sport], I am sure. The whole idea was to try and make a compelling case that everything will be very tightly controlled.”

“Talking to Juventus, their view is the players would live together. Effectively, they are away from any possible contamination. I don’t know how practical that will turn out to be because it is a big infringement on people’s liberty as they are going to be in a very controlled environment.” – Martin Murphy – director of the Aviva stadium – on plans to relaunch professional rugby in connected “bubbles” and “cocoons.”

5,000,000: That’s how many euro it costs to keep the Aviva stadium ticking over every year.

What rugby will look like when it returns to New Zealand on June 13th is beginning to take shape.

“There is a lot of measures in place because the whole world will be watching - and you hopefully will see that they are in place for a reason. Sport can go ahead, which is a huge positive, and hopefully this is the blueprint to do it. So many people will be watching in hope that it goes smoothly and continues it is still fluid in week ten with a competition winner. Only then would it offer a blueprint for other sports to follow.”

Don’t expect to see the All Blacks who sneaked home from Japan just before shut down as insurance costs will deny men like Ben Smith and Brodie Retallick the chance to stretch their legs.

Smith does intend to play some club rugby if the amateur game returns. Again, that’s another tall order.

“Community sport there is a big question if people will want to go back, is it safe?” Nacewa wondered. “Nobody knows just yet.”

The IRFU have been busy behind the scenes developing plans to enable professional rugby’s smooth return when the Irish government gives its green light.

There is talk of the four provincial squads existing in real life bubbles away from their families. The plan is to ferry them from temporary residence (fully togged) to a “cocooned” Aviva stadium for matches.

None of this will happen before August 10th but pro rugby will reappear before a vaccine. It’s the clubs that are understandably worried. For starters, they are awaiting refunds of €20-30,000 paid for-tickets to the cancelled, or postponed, Italy match.

The bleak message has been to “hold firm.”

“Many of you want to know exactly what that means and want to know if rugby clubs can open as amenities or for non-contact activities under earlier phases of the roadmap,” wrote Collie McEntee, the IRFU director of rugby development.

“We are working hard to provide answers to these questions.”

Clubs are wondering how they can hold firm on a €5,000 grant from Lansdowne Road. Unfortunately, the IRFU have much bigger problems. Like their cavernous money pit.