The Offload: Eddie Jones back sticking needles in people’s eyes 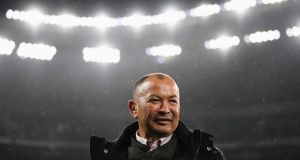 Eddie Jones didn’t hold back when asked about the All Blacks’ production line. Photograph: Getty Images

Our funniest jokes tend to be the harshest because they illuminate uncomfortable truths.

The coronavirus, which apparently disappeared over the weekend, provided irrefutable proof that society is better off when Eddie Jones is sticking needles in people’s eyes.

Thankfully the acerbic old hooker has reappeared just before rugby’s return next Saturday morning, when Warren Gatland’s Chiefs do battle with the Highlanders. By the time you read this Jacinda Ardern may have uttered the magic words - “mass gathering” - which would spark an instant sellout of Dunedin’s 30,000 capacity ‘glasshouse’ stadium.

That’s right, New Zealand is one virologist’s John Hancock away from eradicating the social distancing ideology that has taken root in countries who refused to shut their borders.

Never mind all that. Eddie’s cameo on NZ’s primetime rugby show The Breakdown shined a light on the sport’s enduring colonial values. In 15 short minutes Jones gently reminded Mils Muliaina, John Kirwan and Jeff Wilson why he remains the only coach to outwit them in two Rugby World Cup semi-finals.

The three All Blacks bristled at his incendiary response to Wilson’s suggestion that the 2019 World Cup was won on “brutal physicality.” Eddie informed them that New Zealand only improved due to the set piece education Wales bestowed upon Graham Henry and Steve Hansen. Now, to suggest Kiwis require outside influence to deepen faith in the national religion is nothing short of blasphemy.

Muliaina took the bait: “Given you have given it ‘all that’ about the All Blacks, what are you anticipating from the New Zealand teams in Super Rugby?”

“Ah so many good young players, mate, I don’t know how you do it,” Eddie smiled. “Actually I do: because you got three of the biggest academies in the world - Fiji, Samoa and Tonga. ”

So many Irish subplots, as Sam Burgess ripped open the deepest English wound. Nobody wanted to revisit the 2015 World Cup but Burgess, having been forced into early retirement at 31, had secrets to tell about his underwhelming cross code stint.

The Rugby League legend’s chat with James Haskell, assisted by subtle promptings from Alex Payne, on the House of Rugby podcast branded Mike Ford, the former Ireland defence coach, as a “snake” and painted his son - England outhalf George Ford - as not much better.

Ford senior, according to Burgess, was after Stuart Lancaster’s job as England head coach, so he undermined preparation before and during the disastrous home tournament. This, seemingly, includes influencing the decision for George Ford to replace Burgess with 10 minutes to go and England leading Wales 25-18 at Twickenham in what proved the defining game of Lancaster’s time in charge of his country. Jamie Roberts instantly ran at Ford to spark an unforgettable fight back as Wales prevailed 28-25.

“Mike Ford wanted the English head coaching job so his job was to sabotage Lancaster and his decision making and coaching methods,” said Burgess. “With George being the son in camp it infiltrated into the team culture.”

Sounds like the dust will never settle. Not to worry, the entire England coaching ticket from 2015 is currently employed by the IRFU.

The right honourable Paul Myners CBE has made it extremely difficult for an English club to repeat Saracens systematic cheating. Myners 55 page report puts the “onus” on the player to clarify any future arrangements not included in the newly designed salary cap of £7 million plus two marquee players.

Superstars like Maro Itoje and the Vunipola brothers avoided the severe end of criticism - despite profiting the most from Sarries extracurricular investment scheme - when the club received a £5 million fine and relegation to the Championship for breaching payment rules.

Similar to Juventus heroes Alessandro Del Piero and Gianluigi Buffon when The Old Lady was relegated to Serie B in 2006 for match fixing, these leading England internationals are staying put as Mark McCall, the director of rugby and former Ireland centre, has managed to negotiate one year loan deals for seven young players. For example, Ben Earl is spending next season at Bristol.

“We made some mistakes and were punished for them,” McCall told The Sunday Times.

“To try to suggest that this was equivalent to some boy scouts’ gesture - playing on the heartstrings of short careers, high injury risks and preparing people for the future,” Myners told the Mail on Sunday. “There was nothing in the arrangements which could be described as practical lessons in business for the future. I think that’s a load of hogwash.”

Saracens go down with their five Premiership titles still in the record books and a tasty Champions Cup quarter-final against Leinster pencilled in for September 12th at an empty Aviva stadium.

“With one metre, which is the World Health Organisation’s guidance, you get close to 40,000, and we would like it to come down to that by autumn . . . we want clarity on whether the two metre rule is absolutely essential or is one metre possible.” Bill Sweeney, RFU CEO, seeks to save Twickenham £3 million per test match when supporters return to the stadium, ideally in November.

19,000 - British and Irish Lions supporters have already paid up for the 2021 tour of South Africa that might be changed from July to October.