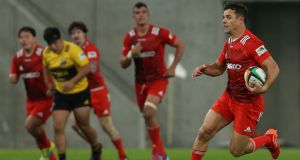 Dan Carter in action for Kobe Steelers in January. The 38-year-old is reported to be poised to sign for the Auckland Blues on a short-term replacement contract. Photograph: Buddhika Weerasinghe/Getty Images

As with the return to action of the Bundesliga a fortnight ago, all eyes in the rugby world will be focused on the Super Rugby Aotearoa competition in New Zealand when it starts next week, and all the more so if reports of Dan Carter joining the Auckland Blues are proven to be true.

The New Zealand rumour mill is awash with speculation that the 38-year-old Carter, who last played Super Rugby with the Crusaders in 2015, has signed a short-term replacement contract with the Blues.

The Blues are said to have been in talks with Carter for some time and a foot injury to Stephen Perofeta, who has been playing fullback for the franchise, in training this week may have fast-tracked the signing of the all-time leading points scorer for the All Blacks and of all time (1,598), dual World Cup winner and three-time world player of the year.

Carter is a free agent after finishing his playing commitments with Japanese club Kobe Steelers once the season there was cancelled due to the coronavirus pandemic, and he has since returned to Auckland with his family. It’s also being reported in the New Zealand Herald that Carter would not be expensive.

“The 38-year-old was in fine touch in Japan during the last three seasons and his motives for potentially joining the Blues are said to be giving back to New Zealand rugby by sharing his knowledge and experience in the swansong of his career,” said the Herald.

Carter’s successor as All Blacks outhalf, two-time world player of the year Beauden Barrett, is expected to start at outhalf in the Blues’ opening game against the Hurricanes at Eden Park, and they also have Otere Black, who helped steer them to five wins from their first seven games before the season was shut down. So signing Carter would leave them spoilt for choice.

If true, the sight of Carter in the jersey of the Auckland Blues may not sit well with Crusaders fans, given he played 141 games and scored a record 1,708 points for the Christchurch-based franchise, where he won three Super Rugby titles in a stellar 13-year career.