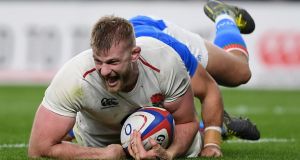 English lock George Kruis is off to the Panasonic Wild Knights in Japan. Photograph: Getty Images

After England’s last match, back in March, Eddie Jones was asked to say a few words about George Kruis, whose impending move to Japan would bring a halt to his international career. “Well, just because he goes to Japan doesn’t mean he can’t play for England, ” said Jones, with a trademark mischievous smile.

Pressed on what he meant, given English Rugby Football Union regulations mean he cannot pick players based outside England, Jones added: “But there’s a special exception.” In reality, he is not going to pick Kruis while he plays for Panasonic Wild Knights and in hindsight, maybe Jones was hinting at the now doomed plan for Maro Itoje to go to France on loan and still be available for his country.

Nonetheless, it was a marked change in attitude from Jones, who in the past, say when Chris Ashton was in such prolific form for Toulon, would simply state: “He’s not eligible for selection.” It spoke of an awareness too, that the RFU’s strict policy may feel the strain again as the allure of playing in Japan grows.

Daren O’Leary, the former Harlequins wing and now a leading agent, believes Japan now rivals France as the go-to overseas destination for players seeking to sample life abroad. Even before the coronavirus pandemic threw Premiership clubs into financial turmoil, the appeal of playing in Japan was on the rise.

The former Gloucester lock Tom Savage, at the end of his first, albeit curtailed, season with Suntory Sungoliath, has only words of encouragement for other players weighing up the move. “Guys like the idea, if you’ve played a long time in England, that it’s a life experience as well,” says Savage. “You go from getting the bus to the same 12, 13 grounds for a long time and all of a sudden you’re getting the bullet train to matches. It’s refreshing. If you are fortunate enough to get the opportunity, if you do your research, I say: ‘Definitely explore it, give it a go.’”

After a brief stint for a cup competition in Japan last June, Savage properly arrived at the Sungoliaths just as World Cup fever was taking hold. With England and Wales reaching the final and semi-final respectively, he believes there has been a willingness from Japanese teams to look beyond Super Rugby and towards Europe for imports. In addition, the zeal with which Japan hosted the tournament – Kruis says: “I really fell in love with Japan during the World Cup” – has heightened the appeal. As O’Leary says: “It suddenly seemed like a far shorter flight to get there.”

A move to Japan also offers the chance to bask in the afterglow of a Rugby World Cup when they thrilled in reaching the quarter-finals. “The support level has gone through the roof,” says Savage. “The seated tickets at the Tokyo stadium were sold out for the majority of the season. There have been crowds of 45,000 – once the Japanese people take a liking to something they buy in.”

It also helps that Japanese clubs – because of how many of them are run as separate arms of much larger companies – have been less affected by the pandemic, ensuring they can offer stable wages and job security at a time when their English counterparts are in crisis. Put it all together and it is easy to see why it has become such an attractive proposition.

Kruis is not alone in heading to Japan next season. Freddie Burns and Alex Goode are also on their way, as is Wales’s World Cup centre Hadleigh Parkes. In previous years, Dave Walder, Riki Flutey, James Haskell, Geoff Parling and, more recently, Ben Te’o, have all done so. But certainly the trickle is getting stronger. And Kruis is perhaps the most significant because he would surely have been picked in Jones’s next squad and it is hard to think of anyone else so settled in the England setup to leave it all behind.

Chris Ashton decided to move to France because he could not get a look-in and though David Strettle did pull out of the wider 2015 World Cup squad because he was joining Clermont he had been ignored for so long he considered his England career over.

The RFU will no doubt hope the pull of the jersey remains strong enough to ensure Kruis is an exception, rather than the trailblazer. It did not go unnoticed, however, that New Zealand – ordinarily just as strict in picking overseas players – selected Matt Todd for their last European tour when he was playing in Japan. The argument went that he had already agreed a return to New Zealand, but it is apparent the All Blacks consider Japan the lesser evil compared with England or France when it comes to their players going abroad on lucrative deals.

More than the RFU, though, it is the clubs who should be wary. Certainly Burns and Goode have plenty left to offer the Premiership – admittedly the latter will return to Saracens after a loan spell – but Gloucester have lost their head coach, Johan Ackermann, and the lock Franco Mostert to Japan. In addition, if any Premiership players contest the 25 per cent pay cuts imposed on them they are free to walk away from their contracts and agree deals elsewhere.

“Everyone craves some level of security in whatever walk of life, but players and supporters have come back from the World Cup, seen the passion for the sport over there, and realised this is a viable place to go for a life experience as well as a playing one,” says O’Leary.

“You do have a short playing career and were salaries to be hit through the pandemic then it’s inevitable you will look to a new opportunity. I don’t think players would go there simply for stability, but it would be one of the major parts, that they can go there, know that their contract is safe, know that they are unlikely to see a pay cut in that time.”