Schmidt stuck in Tokyo jungle, E sport revolution, by the numbers and more 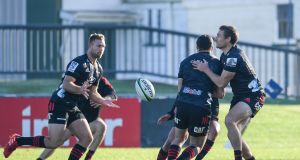 Anyone else confused by “temporary law trials” being optional? We know these are extraordinary times but sport cannot function – well, not efficiently – while operating on one rule in Ireland and another in New Zealand.

That makes for two different games. What happens when we play each other?

The Kiwis – who gloriously resume playing on June 13th – immediately dismissed the 10 optional laws. The English Premiership – not that they are anywhere near returning to training never mind resetting scrums – also took a pass.

The IRFU summed themselves up with a wordy PR 101 response.

Anyway, bet the house that the professional game will scrum down to their hearts content. 30 per cent “transmission risk reduction” be damned. Anyone hear the one about offside line being a natural social distancing mechanism, or that basketballers will more readily spread coronavirus than rugby heavies?

That’s before we get to the orange card for upright tackles. This sounds awfully like a pre-Covid issue. And why orange, like a traffic light?

What amateur players, especially teenagers, need in the coming months and even years is clear guidelines – not optional laws – to protect clubs and schools that are unable to afford testing.

Either scrums are safe or they are not. Either mauling can resume or it must be abolished.

“We are told we have to keep two metres apart,” said World Rugby president Bill Beaumont. “Well, you just can’t do that on a rugby field.”

What are you saying Bill, it’s all over?

The medical report compiled by WR’s hand-picked experts was partially leaked to the media. It needs to be published in full. For clarity’s sake.

It was great to see him again but Joe Schmidt sounded awfully like that Japanese soldier still fighting the war in some isolated jungle seven long months after the All Blacks shredded Ireland at the World Cup.

The question on Newstalk – do you miss rugby? – was dangerous ground for long term observers of this unique coaching mind in media mode.

“I look back at that game,” so Schmidt began a deep dive into the opening exchanges that night in Tokyo. Passes not going to hand. Robbie and Garry clashing heads. Poor Joe is still living the opening “six minutes twenty seconds”.

Still breaking down the detail of his last game, stranded until fresh opposition appears on the horizon. The catch 22 is the 54-year-old “retired” from coaching but, clearly, someone needs to give him a gig.

Any gig at all.

We have an idea.

“At some stage you have to step right away,” Schmidt almost seemed to realize in real time. “And if you do go back in at some stage it needs to be disassociated with your previous role because you want to keep going forward.

“At the moment I keep going back, reliving a bit of a nightmare...It’s not dominating my consciousness but subconsciously it eats away for sure.”

We know the best therapy: the Joe Schmidt weekly column. Come for the forensic detail, stay for craic.

15: The day in June which could see a global calendar agreed upon for club and country, as all the major stakeholders are due to meet.

There were plenty of interesting conversations at the IRFU Analytica conference – like Andy Farrell revealing his interest in the writings of Chicago Bulls and LA Lakers coach Phil Jackson – but the suggestion that the IRFU needs to move into E Sports and the gaming world sounds like a pretty sound plan right about now.

Munster are already involved in a partnership with Phelan Gaming so the seed has been planted.

“Go big or go home,” said Damian O’Donohoe of Ikon Talent. “You don’t get bigger by dipping your toe in the water. From an IRFU perspective, something like E Sports, there would be a lot of suits up there who would be like: ‘Jesus Christ, where do we even start with this?’ But in terms of getting yourself to a new audience, staying relevant, if you are going to buy into this - and we believe it is the future - you got to buy in BIG. There are loads of lessons you can learn along the way but it will mean you are the most relevant rugby union in the world in my view.”

Gus Pichot pushed this very same idea during his failed run to become World Rugby president. It does feel like a missed opportunity.

“I placed 363 bets over four years...When my thoughts went towards my sister, betting on rugby was an escapism that took me to a different space. It was wrong and I hold my hands up. I messed up. I lost £4,000 over four years, so I wasn’t exactly good at it, was I? I was even using my work email address and phone. Pretty stupid, isn’t it? If you don’t laugh, you’ll cry.” - Rob Howley provides some harrowing context to last year’s betting scandal in the Mail on Sunday.