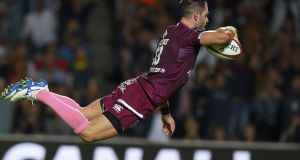 Bordeaux-Begles’ Jean-Baptiste Dubie dives in to score a try during the Top 14 match against Clermont Auvergne at the Chaban-Delmas stadium in Bordeaux. Photograph: Nicolas Tucat/AFP via Getty Images

The steering committee of the Ligue Nationale de Rugby (LNR) has confirmed that the 2019-20 Top 14 season, in addition to the ProD2, has been abandoned without promotion and relegation. This unanimous agreement is not expected to impact on French participation in contingency plans to run off the 2019-20 Champions Cup and Challenge Cup in September and October.

The French still have six clubs standing in the two European competitions – Toulouse are to due to host Ulster with Clermont at home to Racing in the quarter-finals of the Champions Cup – and with the 2020-21 Top 14 season due to start on September 5th, there remains a willingness in the LNR to complete the European competitions if possible.

Indeed, it is understood that EPCR and all its stakeholders have provisionally pencilled in the third weekend of September (18th-20th) for the quarter-finals and the following weekend (25th-27th) for the semi-finals, with the final still set for Marseille, as things stand, on October 17th.

In confirming that the standings after 17 completed rounds of the Top 14 will determine the final positions for the 2019-20 campaign, the LNR have said that qualification for next season’s Champions Cup will be confirmed after EPCR have announced the format for next season’s competition.

The LNR would ideally prefer if the top eight from each of the three leagues qualified for an expanded, 24-team tournament in 2020-21, which EPCR are exploring on a one-off basis, as this would permit Toulouse (seventh) and Montpellier (eighth) to join Bordeaux-Begles, Lyon, Racing, Toulon, La Rochelle and Clermont. A 24-club tournament would also see Connacht qualifying, as things stand, without recourse to a playoff.

The huge losses in revenues streams in French club rugby have been somewhat assuaged by the completion of payments between €3.2 million to €5 million to each of the Top 14 clubs by the LNR. This is due in large part to a loan of €20 million – 90 per cent of which has been guaranteed by the French government – and Canal+ completing its final instalment of €17 million, such is the strength of their relationship with French rugby.

However, the €104 million per season deal which Canal+ has with the Top 14 and ProD2 only accounts for about 20 per cent of the seasonal revenue for clubs in the French top flight, with roughly 30 per cent generated by sponsorship and the remaining 50 per cent accounted for by matchday revenue – be it gate receipts, hospitality, food and beverages, or merchandising.

Bordeaux-Begles is the best supported club in France, with an average of 24,000 at each of its games in the Stade Chaban Delmas and La Rochelle, for example, have had 55 capacity attendances (of 17,000) in succession at the Stade Marcel-Deflandre.

So it was that the LNR president, Paul Goze, recently ventured that the prospect of games behind played closed doors well into next season would constitute a “lethal risk” to some French professional clubs.

The Irish provinces are more inextricably linked financially with the IRFU, but it is reckoned all four would be similarly dependent upon match day income from home matches, ie 50 per cent of its revenue streams.