Tadhg Furlong set for return to rugby after lengthy absence 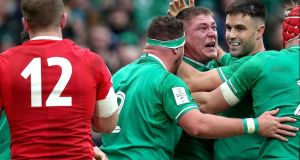 Tadhg Furlong’s injury purgatory should conclude in the next fortnight as the Lions, Ireland and Leinster tighthead prop has embraced a substantial training load as he nears a return to competitive rugby.

The 28-year-old last played for Leinster against Benetton a year ago on the weekend just gone and his most recent game was in the green of Ireland against England in the 2020 Six Nations game Twickenham in February.

Leinster forwards’ coach Robin McBryde explained: “He (Furlong) is close; he’s taken a full part in units. He’s just ticking off a couple of boxes. (In) the next couple of weeks, definitely, I’d be disappointed if we don’t see his name on the team sheet.”

It won’t be in time for this weekend’s Guinness Pro14 game against Munster at Thomond Park but McBryde didn’t rule out a potential involvement for Furlong the following weekend when Leinster travel to Parc y Scarlets. “Yeah it would be great if he could because that would allow him just to chuck his hat in the ring from a national perspective as well with the Six Nations around the corner.”

The official line from Leinster was that Garry Ringrose (jaw) and James Lowe (groin) “will require further assessment this week,” to determine a return date. McBryde smiled: “I’m not going to go any further than that,” but the good news from a Leinster and Ireland perspective is that they are both training.

Hooker Seán Cronin has recovered from a knee injury while outhalf-cum-centre Ciarán Frawley has overcome a hamstring injury; both are “expected to train as normal this week,” and will therefore be available for selection for the Munster game. Those with an aversion to occasionally declawed contests in heavyweight personnel terms between the teams will be pleased to learn that no one is off limits.

McBryde explained: “As far as I know there are no restrictions on international players being selected so it would be great to see both sides going hammer and tongs at it the week before the national squad is announced. There’s going to be a lot of interest surrounding the game and I think it’s great.”

The evolution of Munster’s playing style was the next topic broached and while McBryde acknowledged that, he paid tribute to the central tenets of their gameplan. “I don’t think you can ignore the fundamentals of the game either really and we saw in that great comeback against Clermont.

“They relied pretty heavily on a good driving maul which earned them penalties (and that in turn) allowed them to gain territory into the Clermont half, the 22. Scrum time as well, they used their scrum as a weapon so they really use the set-piece as a weapon to good effect.

“As much as they may offer a little bit more, a little bit rounded as you say, however we can’t look any further than a pack of forwards anyway. It’s the same old story isn’t it; it’s won and lost upfront. We’re expecting a good stern test.”

While Leinster’s Ireland internationals were away at the Autumn Nations Cup, the rest of the squad picked up the slack with impressive cohesion to a point where the returning group were made to work hard to try and reclaim their places. Not all managed it immediately, something that the coaching team appreciated because of elevated standards.

“During the Autumn Nations Cup the boys who were left behind here, they really got through a lot of work. When the Irish boys came back they had to learn a little bit, work a bit harder to make up the ground in our view, anyway, the way we wanted to play in Leinster. There’s no problem with motivation or cohesion, everybody’s just itching to get out there and have an opportunity to play in a Leinster jersey.”

One of those to excel was Rhys Ruddock, arguably the form backrow in Ireland based on performance, stockpiling several man-of-the-match awards. McBryde was asked what qualities he saw in the flanker. “Accuracy, solidity and a great voice, he is very often the captain, has a good understanding of the game and he is pretty effective on both sides of the ball, both as an attacker and as a defender.

“Collision dominance is one thing that he has got on both sides of the ball. That leadership that we have spoken about among ourselves as coaches: we’re not always the loudest team and especially with no crowds sometimes it can seem as if we are extremely quiet on the pitch because you can hear the opposition team and subs whooping and hollering etc whereas we tend to just stay a bit quiet and go about our business.

“But we are always looking for those leaders to stand up and take ownership. Rhys is one of the first to put his hand up.” They’ll need him to maintain that influence come Saturday. The timing and context with the added attraction of reasonably full teams whets the appetite nicely for a full-blooded affair.