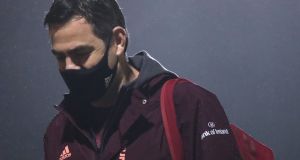 Johann van Graan: “Our theme since this lockdown started way back in March is ‘change or be changed’.” Photograph: Bryan Keane/Inpho

Irish rugby motto for 2021: change or be changed
Johann van Graan speaks the truth. Contingency plans are all that should matter in 2021.

Another shutdown of professional rugby offers a unique and potentially spectacular opportunity. Honestly. Let’s presume the worst case scenario – cancellation of cross border sport – and visualise the solution that New Zealand reached in the summer of 2020.

The survival of professional rugby on this island would come down to Munster’s working motto. “Our theme since this lockdown started way back in March is ‘change or be changed,’” said Van Graan on Saturday night. “We know that change is the only certainty at this stage.”

Shut the airports for non-essential travel and launch a fifth bubble in Carton House as Ireland and the provinces enter into a five-team home and away series. Stick it on the telly: Ireland versus Munster right out the gate.

There will be many logistical problems but they are solvable. Restrict Andy Farrell’s Ireland squad to 30 players with the under 20s to be used as cannon fodder at training. Organise selection so the second best players in every position remain with their provinces. For example, Munster and Ulster would send Ben Healy and Ian Madigan to Ireland camp as understudies for Johnny Sexton.

If the Pro 14 and Six Nations follow the Champions Cup into “tournament suspension” the IRFU could barely miss a beat. Know that the Premiership in England and Top 14 in France will plough ahead.

Change or be changed. Five stadiums and eight games each before a grand final as the days grow longer and those crazy Covid numbers begin to decline and just before the South African franchises are allowed journey north.

Everyone would know everyone else’s calls so results would come down to innovative coaching. Our money would be on Bundee Aki’s Connacht. It is doable. It might be the only option. Alternatively, this column can be revived to ridicule its author.

Paul O’Connell comes around
The baton was passed from Joe Schmidt to Andy Farrell in Disneyland Tokyo on October 20th 2019. Schmidt addressed the Ireland squad for the last time before Farrell stood up as the new head coach.

Worryingly, it has taken almost 15 months to put a suitable backroom in place. The delay in arming Farrell for his first job as the boss of an international team is a clear failing, but maybe the delay was caused by O’Connell needing to be convinced (alternatively, hubris informed them that he was not needed).

Anyway, the appointment is confirmation that Simon Easterby was being stretched beyond his means as both lineout and defence coach.

At least there is clarity about O’Connell’s role. “Forwards coach” makes him an undisputed figure of authority. Presumably, the 41-year-old is only answerable to Farrell and all the others are answerable to him.

That O’Connell’s leadership credentials were developed in multiple crisis situations, none more so than the Lions tour of 2009, should ensure the avoidance of old mistakes but his primary role is to turn James Ryan and Ryan Baird into world class lineout operators (they may both start learning Afrikaans).

The same applies to Ronán Kelleher and whoever is lifting the Ryan duo. O’Connell credits John Hayes’ farmer strength with all the hang time he required to send Victor Matfield and his ilk away home with nothing.

Heavy pressure straight away. That’s presumably why Irish rugby’s greatest leader was so hesitant to embrace the coaching life since his hamstring exploded in 2015.

Pacific Orcas
Imagine the British and Irish Lions had a rival brand. How does the Pacific Orcas sound?

“You’re talking about the best of Fiji, Samoa and Tonga, that would be some entertaining rugby,” said Bristol and All Blacks fullback Charles Piutau. “I’m sure everyone of Pacific Island heritage would love to be involved with a tour like that.”

Like the Lions pulling from four national squads and dipping into Rugby League over the years, there would be no restrictions on Piutau and, say, Bundee Aki linking up with a Pacific Islands outfit for a lucrative summer schedule.

France feels like the best country to host for the first tour. Most of the players already live there. Let the coaching ticket evolve from the Super Rugby franchise they have long been promised and give them enough preparation to prove once and for all that rugby is not a colonial old boys club.

The Pacific Island touring team has a proud if criminally underfunded history. They played the last Test match at the old Lansdowne Road – well, those not blocked by their European clubs – in 2006. Revive it, brand it and enjoy the profit that would undoubtedly follow as the Lions and the Orcas put on Southern and Northern Hemisphere tours every four years.

It might just transform the sport. For the better.

“A scrum against 13 men and we weren’t smart.”
– Andy Friend on Connacht messing up a two man advantage in injury time against Munster

“I think he has wrapped two arms.”
– Referee Karl Dickson

“Are you fucking serious?”
– Kyle Sinckler

“Want to apologise for my reaction today. Not the example I want to be setting. Heat of the moment stuff. Will make a conscious effort to improve. My bad.”
– Sinckler post match

“We may start playing touch.”
– Liam Williams reacts to his red card for a head on head entry into a ruck

By the numbers
11 - Munster are this many points clear in Conference B after victory over Connacht.