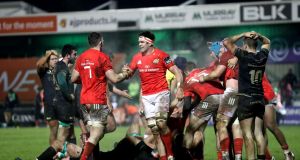 Munster’s Peter O’Mahony and Billy Holland celebrate at the final whistle after their Pro14 win over Connacht. Photo: Bryan Keane/Inpho

Not unusual to have clouds over the Sportsground, but after Saturday’s Pro14 fixture, both Munster and Connacht remain concerned with the lack of clarity on rugby’s future during the ongoing Covid-19 pandemic.

With European competition due to resume next week at the mercy of the French government, the knock-on effect on clubs is taking a toll, says Connacht head coach Andy Friend.

“We need to know. The one thing that hurts and frustrates people is uncertainty, so we need clarity what Monday looks like.

“Every week you are working day-by-day, and it does takes its toll, and I’m speaking on behalf of everyone here at Connacht Rugby. It’s been a long six months. Yes, we still are still playing and we love what we do, and the uncertainty is nobody’s fault, but it does add stress, not just to Connacht, but every Pro14 and European team. So the quicker we can get a clarity on what the next few weeks looks like, the better for everyone.”

Munster’s Joann van Graan says that, since lockdown, “change is the only certainty”.

“I’m not going to lie. It’s not ideal. But we are so lucky to play rugby. As the four provinces, we can give people an out for their mental space. We have such empathy with everyone. It’s way more important than rugby, but if we can play a part in putting a few smiles on people’s faces, that is great.”

No too many smiles from Connacht though after failing to nail a second interprovincial win. Down 16-3 after 61 minutes, Friend’s men did bag a 78th minute try, but spurned a golden opportunity to take full spoils with an 82nd minute penalty. With Munster replacements Rory Scannell and Nick McCarthy both in the bin, Connacht, opted for a five-metre scrum, and man of the match Tadhg Beirne once again turned poacher to ruin any Sportsground party.

It could have been a Connacht steal, but frustrating never-the-less for Friend.

“Should have won,” he says. “A five metre scrum with 15 against 13 at the end of 80 minutes of football. It’s very frustrating to have worked that hard, had that fight right up to the death when you should take it, but didn’t. We’ll need to have a look at it – a scrum – the one thing we didn’t want to do.”

It ensured Munster stretched their lead at the top of Conference B by 11 points in their push for a place in this year’s final. Their aggressive defence stymied Connacht’s best attacking play, which included some eight entries into the 22 and, coupled with Munster’s unstoppable maul, it was a deserved victory.

“Glad we came through this one,” says van Graan. “It’s an away interpro, so you take any away win you can. Really tough place to come, especially against a side high in confidence. To defend a scrum five yards from our try line with 13 men, we did really well.

“We came here to play more than we did in terms of ball in hand, but conditions were tough. Connacht are currently one of the best sides in Europe once they get inside the 22, and they put us under pressure.”

It was not pretty stuff but Munster, boasting some 378 internationals caps in their starting XV compared to Connacht’s 58, enjoyed a dominant opening 40 minutes to lead 10-3.

Having been let off the hook when Carty missed a third minute penalty, Munster opened the scoring six minutes later. JJ Hanrahan made no mistake after Connacht were judged to have illegally stopped a maul, and the result was an early yellow card for hooker Shane Delahunt.

The maul, alas, provided the platform for Munster’s first try before Chris Farrell touched down and Hanrahan added the conversion for a 10-0 lead.

Connacht, struggling in the face of Munster’s defence led by Gavin Coombes, Beirne and CJ Stander, eventually opened with a three-pointer from Carty before the break.

However, Hanrahan kept Munster’s scoreboard ticking over before Connacht gained momentum form a penalty to touch, but again exited their 22 with no reward.

When Munster continued to dominate possession with Hanrahan potting a 61st minute penalty after Sammy Arnold was the player pinged at the breakdown, that should have been it. However, a yellow card for Scannell after a succession of penalties for not rolling away had Munster on the back foot for the first time.

Connacht had a chance and quickly took it with Peter Sullivan scoring their first try with just two minutes remaining and Carty’s touchline conversion brought Connacht within a score.

With 30 seconds on the clock a penalty conceded gave Connacht a glimmer of light. After a clean lineout and a frenetic series of attacks, Ultan Dillane came within five metres of scoring. And when McCarthy was then penalised, it set up a dramatic finale. Alas, Connacht opted for a scrum and could not make the huge advantage count.

Seán Moran: When GAA players were shyer about being the retiring type 06:00
Gordon D’Arcy: It is hard to be excited for a sanitised Six Nations 06:37
Contract future still unclear for many of Ireland’s rugby pros 01:00
Katie Taylor is Ireland’s most admired athlete, survey shows 01:00
Solskjær doesn’t expect any new arrivals before transfer deadline 22:32
Here is your handy guide to sport on television this week