Is it a good look for Six Nations to go ahead as Covid-19 cases soar? 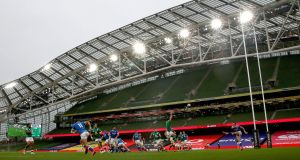 At what point during a pandemic, with death rates spiralling upwards, does playing professional sport cease to be a good look? As the temporary morgues fill up and hospital staff find themselves under ever more intense pressure, should we really be concerned about England’s selection options against Scotland in just over three weeks? Talk about a parallel universe.

Hold that thought as we wait to learn whether the Six Nations, as the organisers still insist, will kick off on February 6th as scheduled. At the very least it will involve multiple cross-border journeys over seven weeks by players, coaches, officials, staff, media and assorted sanitised bottle washers. No crowds will be permitted to attend, clearly, but that means the championship is essentially happening purely for the broadcasting revenue. Is that sufficient reason to ignore the ambulance sirens and press on with European rugby’s annual travelling circus?

While the virus is hardly rugby’s fault, how long can professional sport carry on regardless? Is it not blinkered, or worse, simply to mask up, sanitise the corner flags and blithely continue? As one shrewd observer bluntly put it, debating the possible postponement of the British & Irish Lions tour this summer in the context of current events as “a bit like having a 10-course dinner party on the Titanic”. With more than 80,000 Covid-related deaths so far confirmed in the UK, the situation in France and Italy also depressing and a tragic situation unfolding in South Africa where mass vaccination remains a distant dream, it is a fair point.

So what next? For now, at least, the prevailing wisdom in Europe is that people need something to divert them from the unfolding nightmares elsewhere. Many of the most vulnerable people in the UK are due to be vaccinated within the next few weeks. Best, some insist, to keep the show on the road and then duck and dive in the event of further Covid-19 issues.

Where is the consistency, though, in the French government forcing the postponement of the next two rounds of European club rugby but insisting the Six Nations is not in doubt? So Toulouse cannot travel to Exeter this week because it’s not safe but France can still travel to Twickenham in March? Unless people believe the virus is going to miraculously melt away inside a fortnight – as opposed to the mortality figures continuing to increase – that appears a contradictory stance.

There are counter-arguments, of course. Test teams are in tighter bubbles, there are fewer bodies and games involved. All of which ignores the key point: might there be a better solution? Simon Halliday, the former Bath and England centre who is now chairman of European Professional Club Rugby, is among those who think there is a collective need to look beyond the next week or two. He is confident his own tournament will still be fought to a finish this season but insists now is the time to grab a few important nettles. “We can’t look at this in isolation. If the Six Nations is compromised you could find we’ve got to look at it through a different lens.”

In Halliday’s view not to at least contemplate any alternatives would be negligent. “The Covid situation may last for a few weeks. Hopefully it doesn’t but may well get worse elsewhere. I think we need to look at other options. I’m not sure that ‘We’re OK, we’ve got protocols and they work’ is the answer. No one’s a bigger fan of the Six Nations than me – I loved playing in it. But we’ve got to plan forwards. If the game needs to get collective again, let’s not wait too long.

“There’s a limited time frame in which to look at this. Last year we came up with a sticking-plaster approach. But what if the virus continues to be an issue and does impinge on the Six Nations? Why wouldn’t we take a step back and say: ‘How do we get our business done the best we can between now and the end of the season?’ That includes the Lions tour.”

The global calendar, in short, needs reviewing. Again. Just about everything in rugby is interlinked and even a longtime Lions fan such as Halliday argues the sport urgently needs to get its ducks in a row. He estimates that 80 per cent of the game’s revenue outside World Cups comes from the Six Nations, the three domestic leagues and the European Cup.

“If there is a significant adjustment to our revenue we distribute a significantly reduced amount of money to the people who need it. Last year we all tried to get on with it as best we could. But I don’t think we can do that again. We slightly ducked the big decisions: people played weakened teams, the Pro14 and Top 14 called off their tournaments. If this extends beyond a short, sharp few weeks – which we could probably just about deal with – I think we’ve got to rip it up and start again.”

Which brings us back to where we started. Is it a good look to play international rugby in a pandemic? Is there a better way forward from a moral perspective that also makes more financial sense? Postponing the Six Nations for a few months is not a decision to be taken lightly but, increasingly, it feels like rugby’s best bet. - Guardian