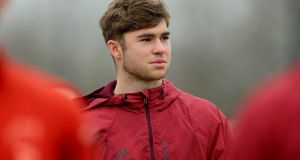 Ronan O’Gara is a big fan of Munster outhalf Jack Crowley and tried to sign him for La Rochelle. Photograph: James Crombie/Inpho

Suppose the IRFU called Ronan O’Gara’s bluff back in 2003 and the young outhalf signed a $12 million deal to punt for the Miami Dolphins. Irish rugby existing in an alternative universe where Johnny Sexton might still be tangled up in red.

Maybe the Dolphins would have retired the number 10 as O’Gara transitioned into the CBS commentators’ booth alongside Tony Romo. Instead, La Rochelle’s head coach is living on the beautiful island of Île de Ré, and filling a triple threat of media duties that includes a very readable column for the Irish Examiner.

Maybe Munster should have retired the 10 jersey when ‘Rog’ bid adieu in 2013 because, until recently, those digits felt cursed. Joey Carbery did nothing to dispel such concerns on Munster TV last week, but a serious battle has developed beneath current starter JJ Hanrahan.

Ben Healy, with that wiry frame and sublime kicking style, looks like the second coming of O’Gara. Not enough to pique NFL interest but Glasgow recently took a swing. However, according to the voice that carries the most weight, Jack Crowley is the new messiah.

“I thought La Rochelle had a good shot at Jack and I think the move would have been a good one for both parties,” wrote O’Gara, who also revealed Crowley’s decision to stick with Munster. “Am I disappointed? Bloody right I am. This boy is a talent.”

La Rochelle made “a proposition” to sign Crowley as he is “somewhat retarded by the aforementioned 10s” but, O’Gara conceded, that “Munster aren’t stupid; they must know what they have on their hands”.

That remains to be seen but, much like the hilarious Dolphins rumour (Florida not Cork), which eventually forced Rog had to call for “formal closure” all this chatter appears to have improved the 21-year-old’s value.

Dr Ann McKee’s warning that children should not be playing rugby has presented parents with an unavoidable decision. McKee, a neurologist, who is considered the foremost expert on brain injuries, provided the Times of London with an unequivocal warning about the direct link between sub-concussive injuries and early onset of dementia.

“Rugby poses the same dangers as American football and I would encourage kids not to play,” said McKee. “I would definitely delay that age of playing until teenage years or later.”

There is no cure for concussion, and there never will be, but Dr Claire Molloy – the 70- times capped Ireland flanker and emergency medicine specialist – offers a well-researched remedy to reduce risk.

“Swansea University did a large study of injuries in women’s rugby,” Dr Molloy told The Irish Times. “They looked at why female players are having more concussions than male players and they decided it was because women aren’t coached until an older age. It is all about the mechanics [of a tackle].

“I think younger kids should be allowed do contact but in a safe, controlled environment but the coaching standard that must be employed – in terms of teaching players how to tackle properly – and really emphasise good tackle and falling technique to reduce the risk.

“Players who never learn how to tackle properly but they get bigger, faster, stronger and then there are bigger collisions when the fundamentals are not right.”

Simon Zebo is crystal clear when it comes to Israel Folau’s potential return to rugby union.

“I would have serious issues with that,” Zebo told the Offload (no relation) RugbyPass podcast.

The rumour mill has Toulon or Bayonne interested in signing the homophobic Wallaby fullback, who is still only 31-years-old.

“It’s an unbelievably backward type of mentality,” Zebo explained. “I have three kids now and if all three of them decided to be gay when they grow up, me and him are going to have serious issues because having a father who plays rugby, they will know who Israel Folau is and they will see all these things – you know the way social media is in this day and age.

“What it could do to people, internally how it could brainwash them into these negative things, basically saying you are going to hell if you’re gay – I have no time for it and it does way more harm than any good that he sees he is trying to do. There are too many people out there that have issues with coming out.”

“Spread love not hate,” Zebo added when retweeting his comments.

The number of players England coach Eddie Jones is allowed to select for a Six Nations bubble, reduced from the usual 34.

“I thought La Rochelle had a good shot at Jack and I think the move would have been a good one for both parties. But he is backing himself to make it at Munster.” – Ronan O’Gara on Jack Crowley

“Due to the change from what it was like pre-Christmas, a lot of people have asked, is this right, is this safe?” – Giselle Mather, director of women’s rugby at Wasps, on the zero testing policy for the Premier 15 competition.

“We are still expecting the Rugby Championship to go ahead this year but perhaps we can add to it and create a ‘mini World Cup’ We have the French in July but if anyone else wants to come out, great. We have a significant British and Irish population here and South Africans. We are open to creating a new tournament and keeping the international calendar going.” – Rugby Australia chairman Hamish McLennan passes the cap.

“What Marcus Rashford has done has been amazing, continually holding the government to account and being a voice for the most vulnerable children. The absolute priority right now is guaranteeing children have devices to learn. When they go back to school, we need a review on access to laptops to support careers in a digitally driven world . . . In future, everyone needs a laptop, the way the world is moving.” – Maro Itoje seeks to get laptops to every kid in England.