Salaries of Men’s Sevens players to remain below minimum wage

Basic salary of €18,000 ‘equivalent of a development contract’ says IRFU 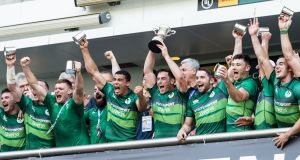 Despite qualifying for next year’s Men’s Sevens World Series, the IRFU insists on keeping the players on the same basic annual salary of €18,000 – less than someone on the minimum wage would earn over a year and a situation that threatens the squad staying together beyond this year.

The squad, who are currently competing as an invitational team at this weekend’s World Series event in Twickenham and again next weekend in Paris prior to joining the series next November, are also due to compete in the Olympic qualifying tournament in Paris on July 13th/14th.

Most of the current 14-man squad made a full-time commitment for the last three years, suspending careers outside the game and basing themselves in Dublin with all the capital city’s living expenses, in a bid to qualify for the World Series and the Olympics, and in the belief that they would receive some modest reward.

But the IRFU high performance director David Nucifora has confirmed this will not be the case.

“In fairness, the quality of tournaments is going to get tougher. They’ll play 10 tournaments, five double-up [back-to-back] as the World Series, so it’s intense and tough but we’re in it to develop players. Hopefully for a lot of these guys, for more of them, it will be a stepping stone into other parts of the game and they’ll benefit financially from that as they come through it.”

In other words, the carrot, or reward, is for the few who might one day sign full-time contracts with the provinces.

“It’s like anything, if you don’t move up the chain people don’t pay you more,” added Nucifora. “It doesn’t matter if it’s sevens or XVs, if you keep getting better and you keep improving you get rewarded.”

Except that in this instance, improving as sevens players is not being rewarded. It is understood that the players will receive bonuses of €500 for competing in each of the 10 World Series events, and €250 for other Grand Prix events, but even if a player avoided injury and competed in every event, the maximum he could earn in a year would be €23,750. Given the full-time commitment, while based in Dublin, this is a paltry sum.

The Irish squad had suggested they seek sponsorship, but this was seemingly rejected by Nucifora as a potentially dangerous precedent and, in any event, such sponsorship would then be invested in the sevens programme rather than the squad.

If this was not satisfactory for the players, replacements will be found elsewhere, but without the experience the current squad has accumulated over recent years, this is sure to diminish Ireland’s performance in the World Series.

Family members and friends of the players have suggested that with a basic salary below the minimum wage, several of the squad will have no option other than to walk away from the Ireland Sevens.