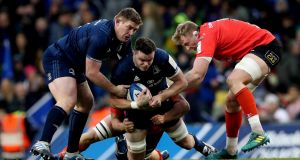 The unofficial power rankings have James Ryan fending off Jack Conan, CJ Stander and Marcell Coetzee (in that order) for The Irish Times statistical awards.

No prize money. Or a trophy. Just the warm glow that comes from this column.

Some of the numbers are staggering. No lock, even a once in a generation player like Ryan, should average more carries than the alpha backrowers in each province.

Connacht are excluded as their opposition in the Challenge Cup would only provide a false narrative. The statistics were tallied from carries, metres gained and tackles amassed during the Champions Cup Pool stages and knockout games in Europe and the Pro 14.

Scott Fardy and Josh van der Flier spiked in big games but injury and the foreigner rule took them out of contention. Fardy only started five of Leinster’s 10 major fixtures in the 2018/19 season while van der Flier’s 21 tackles away to Wasps in January and an astonishing 25 hits against Munster last Saturday mask a difficult period recovering from two separate surgeries.

Beirne’s expected burst into the Ireland team never happened as injury at home to Exeter in January ruined his claim.

Jordi Murphy had the best season of his career but his carry numbers dipped to almost nothing, two runs away to Scarlets and three at home to Racing 92, probably because Ulster coach Dan McFarland deployed the openside in a defensive role (20 and 18 tackles in the same games).

Ulster’s primary weapon either side of the ball was Coetzee. The Springbok proved the difference in their famous January victory at Kingspan stadium over Racing with 22 tackles and three turnovers.

Although criticised for running into brick walls, Stander’s 14.7 carries averaging 27 metres per game was only bettered by Jack Conan’s 15 for 41 metres.

The battle for Ireland’s eight jersey rages into summer after Conan’s 16 carries for 67 metres broke Ulster’s resistance in the quarter-final and the 26-year old-covered 23 metres from 18 rumbles in the Champions Cup final. Last weekend at the RDS he went 41 metres off 17 runs.

Stander is a close second, carrying 13 times for 22 metres in defeat to the European champions and he made 17 runs for 20 metres last weekend.

Such returns make the pair of them indispensable come the World Cup.

But Ryan’s numbers soar over the backrowers, mainly because he is not one of them.

Some of his performances need to be re-watched to fully believe they happened. It’s generally accepted that Ulster would have beaten Leinster if Ryan had not made 27 tackles to sit alongside 21 carries for 16 vital metres.

In Newcastle he carried 19 times for 21 metres and made 19 tackles. Compare that to Seán O’Brien’s 12 carries for one metre and 12 tackles. Conan also showed up at St James’s Park with 18 carries for 23 metres and 23 tackles.

Peter O’Mahony’s numbers do not mirror the leadership, lineout expertise and ruck clearing that makes him so important to Munster and Ireland. His carry and tackle stats are the worst in the Munster pack (even the tightheads John Ryan and Stephen Archer regularly make more tackles).

But the numbers only tell part of the story. Take the signature game of O’Mahony’s career – his man of the match display against New Zealand in November 2018; nine carries for 23 metres (way above his usual) but only eight tackles (he even missed three). When the highlights are shown 100 years from now O’Mahony’s scramble to recover Beauden Barrett’s grubber will inspire Earth’s remaining population.

Ryan’s numbers matter, they really do. O’Mahony’s not so much.