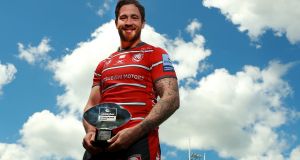 Danny Cipriani has been named the Premiership’s player of the season in further recognition of an outstanding first campaign with Gloucester which he hopes will culminate with a place in England’s World Cup training squad.

Cipriani was this month voted player of the year by his peers and on Wednesday night became only the second person to win the Premiership award in the same season. The 31-year-old has steered Gloucester into the play-offs for the first time since 2011 following his summer move to Kingsholm and was rewarded with a lucrative three-year contract in April amid offers from seven Premiership clubs.

Despite handing Cipriani a first Test start in 10 years against South Africa last summer, Eddie Jones has overlooked him since but the England head coach has been to watch his past two matches for Gloucester and will be in attendance again for their trip to Saracens on Saturday where a outhalf duel with Owen Farrell awaits.

Jones does not finalise his World Cup training squad until July but, if Gloucester fail to beat Saracens on Saturday, Cipriani will get some indication of whether he is in England’s plans when the squad to face the Barbarians on June 2nd is announced. That squad – which will be overseen by Jim Mallinder rather than Jones – will be made up almost entirely of players who will not be considered for the World Cup training squad meaning if Cipriani is included his chances of going to Japan will be significantly diminished.

Meanwhile the Exeter director of rugby, Rob Baxter, has come out in support of World Rugby’s Nations Championship proposal despite concerns from clubs in England and France over increased player workload. Discussions over the proposal continued at the World Rugby council meeting in Dublin on Wednesday with a final decision expected early next month. Baxter said: “If it allows professional rugby to thrive to a greater degree and opens it up to more sides to play at the top level of rugby it’s got to be a good thing.

“If the unions believe it’s good for the game it’s very hard to view it as a negative thing because it’s got to encompass the players, the coaches, the supporters ... the people who are the lifeblood of rugby.”

Geordan Murphy’s first season in charge of Leicester has gone from bad to worse after he was charged by the English Rugby Football Union for alleged verbal abuse of a match official after his side’s 32-31 defeat by Bath last Saturday.

Murphy, whose side finished the Premiership in 11th place, faces two charges next Wednesday and could be hit with a suspension as well as a fine if found guilty.