Matt Williams: Leinster can look to Ali’s Rumble in the Jungle for victory template

Province must frustrate Glasgow and land punches when opportunities arise 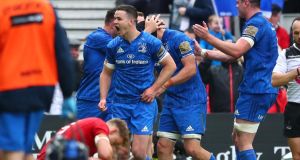 The magical Welsh outhalf Barry John once said, “The way a man plays rugby is vision into his soul.”

The Irish soul of “the game they play in heaven” is all-out attack.

The rise of Irish rugby to the top of Europe and the world can be charted alongside the evolution of Irish teams from playing a dogged “give it a lash” kick, chase and bash game, to the creativity mindset in Irish rugby we witness today.

For Leinster this is especially true. It is in Leinster’s DNA to attack. They are at their most potent when they are in all-out attack mode.

Sitting beside the creativity of attack, is the necessity to defend. The term “defend” carries negative connotations.

For Leinster this week against Glasgow, the key is to change the mindset from the negative, “we have to defend,” to the positive, “we will attack Glasgow’s possession”.

Like Muhammad Ali’s immortal “rope-a-dope,” in the Rumble in the Jungle in October 1974, when he broke every rule in boxing and laid back on the ropes, creating a defence so unique, it defied every piece of boxing lore. His opponent George Foreman, one of the most destructive heavyweight hitters in boxing history, pummelled Ali with literally hundreds of powerful shots.

All the while as Ali was leaning on the ropes, he was whispering into Foreman’s ear, “You ain’t so bad George. Is that as hard as you can punch? George, I thought you could hit harder than that.” As Foreman exhausting himself round after round with energy sapping fruitless attacks, Ali, absorbing punches that would have dropped lesser mortals, waited for his opportunity to strike.

It only took three Ali punches and Foreman, impossibly spiralled, uncontrollably to the canvas.

It remains one of sports greatest examples of tactical defensive genius. The counter-intuitive, “attack the attacking strengths of your opponent”. Positive defence.

Glasgow are like Foreman: not loved by everyone, but respected for the power of their attack. From the short jabs of their forward runners, to the destructive combinations of the inter play between forwards and backs, with the knockout “right hook” ability of Stuart Hogg and their scintillating wide attack. They are worthy Championship contenders.

So what’s the Leinster plan?

Before the Rumble in the Jungle, Ali, the “Louisville lip”, taught the locals in Zaire to chant, “Ali, bomaye”. In context it means “Ali, kill him”.

During the days leading up to the fight, the locals were all chanting “Ali, bomaye, Ali bomaye”. This angered Foreman. Then the “rope-a-dope” frustrated him and Ali laying back on the ropes with no fear made him mad.

Great warriors like Ali are calculated, determined and coldly ruthless.

I can’t help but think Leo Cullen, in his own quiet way, is laying the beginnings of an audacious trap, every bit as frustrating for Glasgow as rope-a-dope was to Foreman.

Not “The Rumble in the Jungle”, more the “Celtic Park Shuffle”.

I have never before heard Cullen publicly utter a contentious word about his opposition as a player or coach. He rarely speaks without considering his words. His words this week grabbed all the headlines.

Celtic Park Shuffle, Step 1. Leading up to the event, anger the opposition through the media with a topic that has nothing to do with the playing of the game but will really get under their skin. Box ticked. Leinster bomaye.

The first time I witnessed the implementation of a rushing defensive system was in 1985. The Sydney-based Canterbury-Bankstown Rugby league team was coached by a great innovator, Warren Ryan. He implemented what was termed at the time “umbrella defence”. The Berries defenders stood close together, compressing their line. The defenders in the outside channels sprinted forward cutting off any hope of wide passing. The inside men attacked the ball carrier in what was termed “gang tackling”. Two or three defenders swarming the attacker.

It’s taken rugby 30 years to catch on to Ryan’s concept, but now it’s here we are all witnesses to its destructive power. Leo must channel Ryan’s “D”. All out attack on Glasgow’s possession is the mission.

Glasgow were smashed by Saracens twice in the Heineken Cup. Saracens rushed, bullied and belted Glasgow into forcing their passes and playing catch-up rugby. Owen Farrell’s kicking game pinned Glasgow in their own half.

Johnny Sexton must deliver a powerful attacking kicking game. Leinster can not play this game 40m from their own try line. Accurate kicks with fast, effective chasers that tackle and frustrate the Glasgow counter-attack will reap rewards.

Once Leinster gain possession in Glasgow’s half it is all-out attack. Run at them in relentless waves and when the opportunities arise, Leinster have to land their punches and take their points.

Celtic Park Shuffle Step 3. Be as ruthless, brave and courageous as Ali to implement a plan as audacious as the rope-a-dope. Attack Glasgow’s attack with a real physical menace and a warriors’ mindset.

The Celtic Shuffle plan is now operational. If Leinster can implement the plan they will retain the championship.