Stuart Hogg looking to bow out on a high against Leinster 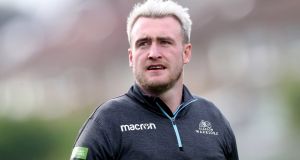 Stuart Hogg: “There are strengths and weaknesses in Leinster’s attack and defence and the same with us.” Photograph: Billy Stickland/INPHO

Stuart Hogg doesn’t subscribe to the sentiment of the occasion. Last November he agreed to join the Exeter Chiefs on a two-year contract this summer. Saturday marks his final match for the Glasgow Warriors as they take on defending champions Leinster in the Pro14 final at Celtic Park (6.30pm).

The last couple of weeks – he played his final game at Scotstoun in the semi-final win over Ulster – he’s been trying to fend off any maudlin feelings . He explained: “The thing for me is that I am just concentrating on my job for the team and making sure that we have the opportunity to take home the Pro14 trophy. It’s been a target all season.”

An obvious parallel to draw between Glasgow and Leinster is how they fared in defeat to Saracens, the Warriors thumped in a Champions Cup quarter-final at Allianz Park, the Irish province unable to lower the colours of the English club in the final at St James’s Park. Saturday’s Pro14 finalists both absorbed lessons that can be seen in the positive manner in which they responded to their respective defeats.

Hogg explained: “The game against Saracens was probably the best thing to happen to us; they gave us the kick up the backside that we needed. Up front we were bullied, we weren’t clinical enough as a backline and that is the way that you have to play in these final games. We have had a good reaction on the back of that game. We feel we are in a good place to go out and have some fun at the weekend.

“We are finding the balance with our kicking game and I think Adam (Hastings), George (Horne) and Ali (Price), Pete Horne, they have put us in the right areas and it has been a lot tougher for (opposing) teams to exit. We have found ourselves with a good amount of ball but in the right areas of the field. We have kept that scoreboard ticking over nicely and scored some nice tries along the way.”

Hogg admitted that when training wasn’t sharp enough or performance levels dipped in matches that players kept referring to the Saracens match; they wanted it to be a watershed moment in their season. It helped the group to refocus. Glasgow won a few weeks ago in the RDS but the changes to both starting teams on Saturday evening will be appreciable.

The Scottish club won’t be leaning heavily on that result to foster self belief, and there isn’t a revenge motif that dates back five years to when Leinster beat them in the 2014 Pro12, as it was then, final. Hogg said: “That was a long, long time ago now. We can’t really dwell on that. I think we have had some good ding-dong battles with Leinster over the years. At times in big games we came up short.

“They came across here I think it was last season in the second game of the Champions Cup and bullied us. It was a smash and grab job from them and they took home the victory. It’s going to be a hugely physical battle up front. Defensively we are going to have to be spot on, try and keep their key players out of the game as much as we possibly can and make the most of the opportunities we get with the ball.

“There might be only five or six but we have to make sure we are making the most of it; keep that scoreboard ticking over and play in the right areas. Rugby is a fairly simple game when you get it right so here’s hoping at the weekend we can do exactly that. There are strengths and weaknesses in Leinster’s attack and defence and the same with us. We are very much looking forward to see what is on offer.”