‘To allow somebody to say that just because he is your best player . . . is a terrible message’ 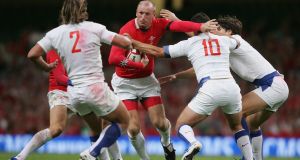 Wales captain Gareth Thomas is tackled by Lionel Beauxis and Dimitri Szarzewski of France during a Test match at the Millennium Stadium in Cardiff. Photograph: David Rogers/Getty Images 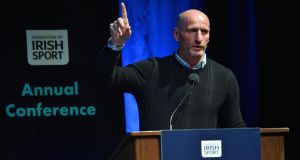 Gareth Thomas came clad in pink for his first game as an openly gay rugby player.

As did his Cardiff team-mates.

“They must have known you were making the announcement Alfie because they got the colour for you,” shouted Martyn Williams across the changing room before facing Toulouse in December 2009.

Thomas had just revealed his sexuality to the whole wide world. Ten years later, not a single rugby player of similar stature has followed the former Lions and Wales captain’s lead.

“One of the strangest things ever happened to me that day,” Thomas remembers. “In Toulouse when you get off the bus you go through a tunnel of fans. About seven or eight thousand of them were just silent.

“No booing, no jeering, no name calling. Absolute silence. It not only made me feel awkward but it set a really awkward mood amongst the team because no one expected it.

“Everyone had an inkling this was because I made the announcement but no one wanted to talk about it.”

Williams, the great Welsh openside and Thomas’s friend, sliced through that tension.

“Cardiff Blues obviously wear blue but this time someone decided we would wear our second strip, which is electric shocking pink.

“Trust me, if you talk about a problem you can find a solution but if you laugh about it that problem can very, very quickly disappear.”

The words spread smiles throughout The Helix audience in Dublin City University where Thomas was delivering the key note address at the Federation of Irish Sport’s conference on inclusivity.

In recent weeks the definition of inclusivity has been tested within professional rugby. Thomas has not shied away from the condemnation of homosexuality delivered by Israel Folau. Today in Dublin was no different.

“Folau has taken a platform he has been given by rugby to promote his religious beliefs. People have connected his views to the rugby world but my experience, being within the rugby world, is that is definitely not the case.

“It’s not Israel Folau’s first attempt at doing this. My fear is, and what I don’t think he understands, is the platform Folau has [reaches] young children and influential people, who will feel if somebody can say [that homosexuals are going to hell] on such a huge scale then why can’t it be something a child can say to another child in the playground or somebody can say to somebody else in the pub or in the park?”

“Billy Vunipola’s ‘like’ and Billy Vunipola’s response I feel the [English] RFU have been very very weak in their response,” Thomas continued. “Because, to me . . . there should be zero tolerance.

“To allow somebody to say that just because he is your best player and be able to give a very feeble weak response, again, is a terrible message to show.”

Vunipola was formally warned about his comments on social media by the RFU and his club Saracens.

“It all comes back to something a lot bigger than rugby. They just used their base in rugby to say a message. This comes down to their religion.”

Gareth Thomas’s message, overall, was one of hope. Rewind back to Toulouse and the day he stopped “lying” to himself and everyone else.

“We were out of the field warming up with 50,000 fans crammed into the stadium and the Cardiff Blues team was read out. The moment I dreaded: 15 Leigh Halfpenny. The crowd jeered and booed. 14 was Tom James. The fans booed or jeered. 13 was Gareth Thomas and 50,000 fans cheered as loud for me that day as they did for any of their hometown heroes.

“And you know what? I remember standing on that field thinking to myself: ‘This is the only field that I have ever dreamt of being on where I can be myself, which is passionate, patriotic and extremely proud.

“But that day for the first ever time in my entire life I stood as a professional rugby player being honest.

“People used to say to me: ‘Do you think your performances will be affected by making this announcement?’ I’d just say: ‘Do you not realise how fast you can run or high you can jump when you don’t carry such a weight on your shoulders?’”

Despite giving this speech many times since he retired in 2010 the 44-year-old still choked up talking about his father’s reaction to hearing his son is gay.

“My dad, his name is Barry, but when I played rugby he became ‘Gareth’s father’.

“He worked in a post office, my mum in a hospital and they were extremely proud to be my parents. I quickly realised my parents had to come out with me as well.

“They had to go into work and people would be talking about me behind their back.”

A week after telling his parents – who initially reacted with silence – they asked him over to the house where three glasses of champagne were on the table.

“My father stood up. Now he is a very, very quiet man but when he speaks people listen. He took his glass, raised it to the sky and said: ‘Son, I’d just like to toast the start of the rest of your life.’

“That was the support I needed.”