Licence to assault: Rugby players need to be protected so let’s protect them 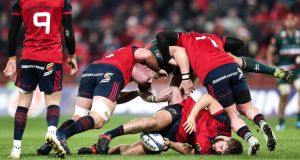 The current ’clear out’ in rugby is a strange, dangerous combination of sumo and judo.

While there is no doubt that World Rugby takes player safety seriously the breakdown post tackle – the ruck – needs to be looked at much more proactively, as does the tackle.

The current situation is akin to the “scrum hit” (effectively a charge) which was introduced by several coaches whose teams had poor scrummaging technique and they wanted to win the scrum contest before it was supposed to start. It quickly spread through the game and we all remember interminable free kicks, resets and so forth.

It took World Rugby too many years to sort that out and the sport was the poorer for it. Now that the scrum engages as per the laws, the situation is significantly safer and better. It’s now impossible to understand why the ball is not thrown in straight – the scrum halves are making the referees look pretty dim when they consistently get away with throwing the ball into the second row. The same referees adopt a completely different standard to the lineout throw.

Now, firstly, bear in mind that the key difference between rugby union and both rugby league and American Football is that the game stops when the tackle is complete. In union, the contest for possession is just beginning.

In this contest the breakdown after a tackle – the ruck – the so-called “clearing out” of players has now become completely unsafe. A player (the poacher) bending down to pick up the ball can be smashed to the ground by one or more opponents whose job is to hit as hard, with as much force as possible to prevent the pick up/turnover. It is a strange, dangerous combination of sumo and judo.

The poacher is obviously in an extremely vulnerable position and to be hit by one opponent who weighs over 20 stone, or by two whose combined weight is 40 stone, cannot be anything other than unsafe. He is often cleared out before he has even touched the ball – and that’s American Football.

Of course this has spread to all levels, and referees (even at schoolboy level) are telling players that they “didn’t survive the collision.” This is not the referees’ fault, but it’s the way the game has been allowed to evolve. It cannot be sustainable.

World Rugby need to stop this without delay. A reference to the current laws would help and would ensure a less violent impact at the breakdown. Without needing to introduce new laws, let’s apply what’s there at the moment.

These are pretty simple and do not mention “clearing out” anywhere. They do state, though, that players must try to stay on their feet in a ruck, must bind on another player and cannot intentionally collapse a ruck. The polar opposite of all of that is being allowed.

If anyone proposed a draft law that resembled the situation currently being allowed it would read like a licence to assault.

The law is also clear that players are not allowed to enter at the side of a ruck, but this – previously tightly applied – has been allowed to slip, presumably in the interests of continuity. Applying the law doesn’t lead to a whole lot more penalties, but it does lead to a change in player behaviour, and that’s what is needed.

In relation to side entry, the first offence is frequently offside, then the offending player hits the poacher side on – Dan Leavy is still seriously injured following a side entry which impacted on his unprotected knee.

All of these actions, and certain forms of tackles which are outside the laws are inherently dangerous. There were several awful tackles in the Six Nations, some punished, some not. It was unedifying to hear some coaches argue that these were, in fact, perfectly okay.

It is not clear if reducing the height of the tackle will help, but it is probably worth pursuing even though a recent experiment was halted as concussion instances were not being reduced. Reducing the height from ‘not above the shoulder line’, to not above the ‘nipple line’ is one proposal. But, in real time or even in slow motion, this is very difficult to officiate. Another consideration, to confine the height to the midriff, may be a better option.

What will it take, and how long, to make the necessary changes? Several high profile players have been forced into early retirement and there have been several deaths in France last year due to injuries sustained. One would think that these events demand considered and prompt action. And if they don’t, what will?

The normal process to change laws is the World Cup cycle. Each union takes soundings from across all levels of the game and submits proposals for experimental laws to World Rugby. Those that receive cross-union support are trialled. It’s a good system and it also allows changes which relate to player safety to be introduced at any time outside the cycle.

It’s clearly the responsibility of unions, and particularly World Rugby, to do so now.

Other suggestions have been made to improve the safety of the ruck, including not allowing the ball to be poached at the tackle. And maybe that’s a sound idea; but it won’t provide the solution as long as the ferocious “clearing out” is allowed to continue.

Rugby is a terrific game and it teaches many values to kids and at club and university level has incalculable value. Friendships are made for life. Parents never used to hesitate to introduce their kids to the game. They’re hesitating now. The game and it’s players need to be protected. Let’s protect them.