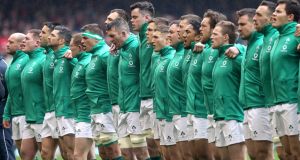 No sooner will the die be cast on the 2018-19 season than the countdown will begin to the World Cup when Joe Schmidt unveils a preliminary squad of 45-plus on Monday or Tuesday. And David Nucifora, the IRFU performance director, has set a target of at least reaching a first semi-final as the threshold for a good tournament.

“I think we’ve got to do better than we’ve done before, that’s the starting point, isn’t it? We’ve got to get to a semi-final, and obviously we want to go further than that if we can. But I think we’d be kidding ourselves if we thought that anything worse than a semi-final is going to be good for us.”

“Hopefully we get the bounce of the ball or a bit of luck from the injury gods along the way, but we’ve tried to do everything we can do to prepare and like any high-level competition, you do need an element of luck along the way in those tournaments.”

The Japan odyssey marks the finale to Schmidt’s 6½-year tenure and looking ahead to life after Schmidt, Nucifora ventured: “It’ll be different, that’s what it’ll be, and all the things that he’s done and left behind are not going to be lost.

“We’ve focused on how do we on build on this and we’re really confident that Andy Farrell is going to be able to build on what Joe has done. Now Andy’s a different man to Joe and he’s going to do it a different way, but one of the reasons that we recruited Andy was because one, we believe in him as a coach and as a person, but Andy was super keen to come here all those years ago because he wanted to work with Joe and he feels that he’s a far better coach for the time he’s had with Joe.

“He’s going to be put to the test when he takes over post the World Cup, but I think that Joe is in ‘Joe mode’ at the moment. He is so focused for this World Cup and the preparation that they’re about to go into, and there’s no other thought in the minds of those coaches other than what’s in front of them.”

The tournament could mark the finale to the Irish careers of Seán O’Brien and, conceivably Rob Kearney. O’Brien has signed a three-year deal with London Irish post the World Cup after his contract was seemingly downgraded, and Kearney may move to France in similar circumstances.

Nucifora has just signed a three-year extension and is assuredly the most powerful man in Irish rugby, perhaps of all time, with player contracts a major part of his remit, but he denied O’Brien (32) and Kearney (33) were expendable.

“They’re people, so you like to think of them as that first, and they’re not commodities.”

Yet he added: “We’d be more than happy for Rob to stay, but it’s along the same lines. He’s been a great contributor but we also have to look to the future as well, and unfortunately in this business, things have a value as well, and you’ve got to try and make those things aligned.”

According to Kearney’s agent, David McHugh, there is “quite a disparity” between the two parties, to which Nucifora responded: “I haven’t dealt with that fellow who was his agent, to be honest. I’ve never had a conversation with him so I don’t really know where he came from into it. I didn’t realise he was Rob’s agent.

“I’d suggest that we’re very, very close and we’re sorting out a few things at the moment. So we’ll see where we get to but I’d be hopeful.”

Another key part of Nucifora’s in-tray is the void on Munster’s coaching ticket following the departures of Jerry Flannery and Felix Jones. “They may leave the system for a while but you’d be hopeful that they’ll re-emerge somewhere over time.

“We would have been happy if they’d stayed and we would have worked hard with them to keep improving. Now we’ve just got an opportunity to bring in some really good experienced coaches to support Johann [van Graan] and the team because there’s a good playing group down in Munster and I think that we can get them to that next level if we all make the right choices with the coaches.”

Nucifora predictably hailed the player movement between provinces which he has striven to promote as a healthy development, and citing the examples of the Ulster-bound duo of Jack McGrath and Bill Johnston, said it is now player driven.

Nor did he feel this was weakening provincial identity or, when their Heineken Champions Cup final defeat by Saracens was put to him, Leinster’s strength in depth.

“Leinster could have won that game, without a shadow of a doubt, if they’d taken their opportunities and we’d be talking about something different. So I don’t see it as an issue.”

The women’s team have slipped to 10th in the world amid an apparent priority for the Sevens game, but Nucifora said: “We don’t have enough players to be able to split anything up.

“We acknowledge that the game needs a lot of growth and we’re totally committed to growing the game,” he added, citing investment in increased participation, better competitions and better coaching. “It’s a long-term plan and has to be because the reality of the numbers that we have playing the game here is nowhere near what we need.”

The IRFU were not, as has been reported, against the concept of relegation in the proposed Nations League. “What we are doing is asking all the right questions. And the thing at the moment is the speed at which things are being put in front of people. You want to be able to sit back, take a deep breath and think, and then make a good decision, and I suggest that’s what we’re doing.”

Nucifora denied that the end-of-season Cara Cup in Boston featuring provincial A squads drawn heavily from the club game was a deliberate slight on the AIL after the clubs rejected the union’s proposals for a new competition but, pending their conversations with the head of domestic games, Colin McEntee, it was up to the clubs to come back with a new proposal.