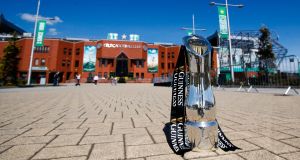 It’s time for one last dance. An epic, frustrating, but ultimately enjoyable rugby season comes to an end on Saturday evening.

Defending Pro14 champions Leinster are bidding to retain their crown against Glasgow, in Glasgow - the final act of the 2018-19 campaign.

After Saturday’s showdown, which brings together the competition’s two best teams, the Rugby World Cup will come sharply into focus.

Only a short summer holiday lies between Ireland’s players and their pursuit of the Webb Ellis Cup in Japan.

But first, there’s one last bit of domestic silverware to be fought for.

For Leinster, it has been a strange season. They have been supreme at times, and waltzed into both the European Cup and Pro14 finals. However, a brutal loss to Saracens means defeat on Saturday would render them potless.

Glasgow, meanwhile, have played some thrilling rugby - racking up bonus points galore in the Pro14 but running into Saracens three times on the continent.

Saturday’s winners will be able to look back on their season with pride. The losers will be facing into the summer wondering what might have been.

It all plays out at one of football’s great cathedrals - Celtic Park - a fitting venue for the season’s curtain call. Here is everything you need to know, before the Pro14 final.

The final of the 2018-19 Pro14 championship, with defending champions Leinster taking on Glasgow, in Glasgow.

The match takes place on Saturday May 25th, with a kick-off time of 6.30pm.

The Champions Cup final was held at one of football’s great venues – Newcastle’s St James’ Park.

We head slightly further north on Saturday, with the two sides meeting at Celtic Park – known to Celtic supporters as Parkhead, or Paradise. It is the first major rugby match to be held at the famous old ground.

The match will be shown live on Eir Sport (coverage starts at 5.30pm), but there’s good news – it’s also being broadcast on TG4, meaning you don’t have to jump over a pay wall in order to see the season’s finale.

And you can also follow all of the action from Glasgow via the Irish Times liveblog, with will be up and running from around 5.45pm on Saturday.

More than 40,000 tickets have been sold but Celtic Park’s 60,000 capacity means there are still plenty available, which you can purchase here.

Parkhead is one of the few major football grounds in the UK which has a safe standing section installed. Normally home to Celtic’s Green Brigade, the rail seats will probably be a bit quieter than usual on Saturday – but could offer a nice change of scene for more intrepid supporters.

Glasgow is the place to be on Saturday, with the Scottish Cup final between Celtic and Hearts kicking off at 3pm. Hampden Park is a 52,000 sellout, meaning there are expected to be more than 100,000 supporters in the city. It will be busy - but fun.

The Warriors racked up 81 points - including 15 try scoring bonus points - from their 21 league fixtures, earning themselves a home semi-final against Ulster.

Glasgow were then rampant against Dan McFarland’s province in the last four, running in seven tries during a 50-20 thrashing at Scotstoun. A decent way to warm up for the final.

Leinster’s progression into the semi-finals was also serene - they finished well clear of second place Ulster in Conference B and their dominance was never really threatend.

Onto the last four, and a date with Munster at the RDS. The hardly fought interprovincial battle many anticipated in the wake of Leinster’s gruelling defeat to Saracens never materialised, with Leo Cullen’s side cruising to a relatively facile 24-9 victory in Dublin.

What does the formbook say?

By virtue of being split into different Pro14 Conferences, the two sides have met just once this year - a 34-29 win for Glasgow at the RDS on April 13th. However while the Warriors were deserving of their victory, their need was greater than Leinster’s. It moved them above Munster while Leinster, sitting pretty in Conference B, had a Champions Cup semi-final against Toulouse to plan for a week later.

The two sides were drawn together in the 2017-18 Champions Cup pool stages, with Leinster dishing out two heavy beatings on their way to a fourth European Cup title - winning 34-19 away, and 55-19 at home.

Glasgow fared better in last year’s Pro14, winning 31-21 at Scotstoun en-route to topping their Conference. However they were knocked out in the semi-finals by the Scarlets before Leinster went on to lift the trophy.

It has been a gruelling end to the season for Leinster - particularly their Champions Cup final defeat to Saracens - but Cullen’s squad is in relatively good health. Devin Toner will be a big miss - the secondrow picked up a knee injury in the semi-final win over Munster and is facing 4-6 weeks on the sidelines. Sean O’Brien also misses out, on what would've been his final appearance in the Leinster blue before a summer move to London Irish.

Dave Rennie emerged with a clean bill of health from the emphatic win over Ulster - he has named the same XV.

Leo Cullen’s isn’t normally renowned for mind games but he suggested earlier in the week that Celtic fans should be supporting Leinster this weekend, given the Glasgow players “all support Rangers.”

Opposite number Rennie wasn’t taking the bait: “But ultimately our thinking is that we’ve got lots of players who support different football sides, based on where they originate from.

“We have a heap of football fans who come and watch us play because they enjoy the entertainment, and that’s what we’re looking for. Obviously we represent Glasgow, and we hope that regardless of what sport you’re involved in you’ll want to be there for what should be a fantastic occasion.”

Celtic legend Jim Craig, a member of the 1967 European Cup winning Lisbon Lions, was less sympathetic: “It’s nonsense, like a lot of things like that. But you’ve got to put up with it. If I ever meet Mr Cullen I’ll have a private word with him. He got publicity over his words, and maybe that’s what he was wanting.”

The Warriors could leave Leinster potless. . .

Gordon D’Arcy is well aware of the challenge awaiting his former side on Saturday - especially given the difficult few weeks they have had.

“On top of Saracens and Munster, has enough damage been done to Leinster? Can Glasgow finish them off? One more game, Leinster will be highly motivated. . .

“Glasgow has a real chance to leave Leinster trophy-less. A stellar Johnny Sexton performance can turn that theory to dust. But something special will be needed at Celtic Park.”

To lift the trophy

Nigel Owens (WRU) is in charge of proceedings at Saturday teatime.

There’s a bit of rain forecast in Glasgow on Saturday, with temperatures around 15 degrees. Pack a light mac.

Leinster might have seen the last of Seanie O’Brien in blue, but Glasgow are saying farewell to their mightiest warrior - Stuart Hogg - on Saturday. The flying fullback moves to the Exeter Chiefs in the summer, meaning keeping him quiet could prove more difficult than ever as he looks to sign off with some silverware.

This place really is Paradise. . .