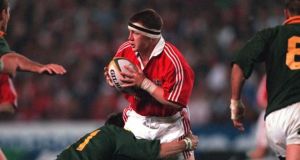 Paul Wallace played all three Lions Tests in South Africa in 1997 having been called up as a replacement. Photograph: Bily Stickland/Inpho

It’s a nervous time for those players selected to travel with the Lions to New Zealand who are still involved with their clubs and provinces in season-defining games in the Guinness Pro12 and the Aviva Premiership.

The semi-finals take place in both tournaments this weekend with the respective finals on the following Saturday, so for some players that will mean two full-blooded matches before they can join up with their Lions team-mates.

In an Irish context, Leinster’s Robbie Henshaw, Johnny Sexton, Jack McGrath, Tadhg Furlong and Sean O’Brien and from Munster, Conor Murray, Peter O’Mahony and CJ Stander will all be hoping to come through unscathed potentially with the added bonus of winning a trophy. Looking back at the British & Irish Lions in the professional era, 10 players in the five tours from 1997-2013 inclusive, originally selected for squads either didn’t travel or failed to play a match because of injury or suspension.

Irish players in particular have had their fair share of misfortune. Going back to the Lions tour to South Africa in 1997, Young Munster, Munster and Ireland stalwart Peter Clohessy was part of the original squad chosen by head coach Ian McGeechan but had to withdraw on the eve of departure because of a back injury.

Clohessy sustained the injury in training for a match with Queensland against New South Wales and hadn’t played in three weeks before undergoing a fitness test at London Irish’s old ground, Sunbury.

He said at the time: “I am absolutely devastated. I started the training session, but knew that I was just not right and reported the problem. He became the first Irish player to be ruled out prior to departure since Donal Lenihan withdrew prior to the 1983 tour because of a hernia.

He bumped into his replacement, Ireland’s Paul Wallace, at Heathrow Airport, as one was arriving and the other leaving. Wallace went on to play in all three Tests in a 2-1 victory over the Springboks.

There were no players ruled out ahead of the 2001 Lions tour to Australia but in 2005 (New Zealand) St Mary’s College, Leinster and Ireland’s most capped player at the time Malcolm O’Kelly suffered a tour-ending groin injury in training before a game had been played; he was replaced by Simon Shaw. O’Kelly had been on the Lions tour four years previously.

England fullback Iain Balshaw was injured prior to travelling and countryman Mark Cueto was called up to deputise. On the 2009 Lions tour to South Africa, there was something approaching carnage from an Irish perspective.

Ireland’s 2009 Grand Slam scrumhalf Tomás O’Leary broke his ankle while playing for Munster against the Scarlets, 72 hours after being included in the Lions squad, hooker Jerry Flannery tore a bicep while training in camp with the tourists at Pennyhill Park & Spa outside London, while Alan Quinlan missed out because he picked up a suspension in a Heineken Cup semi-final against Leinster.

Mike Blair (Scotland, scrumhalf), Ross Ford (Scotland, hooker) and Tom Croft (England, flanker) were the beneficiaries. Wales centre Tom Shanklin was also ruled out through injury prior to travelling – he was not replaced – while Leigh Halfpenny was replaced by James Hook, flown out subsequently but failed to recover from injury.

On the most recent Lions tour that ended in a 2-1 series win over Australia, England hooker Dylan Hartley was part of the original squad, but missed out after receiving a hefty 11-week suspension for verbally abusing referee Wayne Barnes in the Aviva Premiership final.

Wales prop Gethin Jenkins did travel to Australia but was invalided out of the tour without playing a match.

For those players who are on Warren Gatland’s “stand-by list” for next month’s tour to New Zealand they may be interested in the graphic on the left which shows that 30 players have been summoned as replacements over the past five tours, working out at an average of six.

Two players who had the least distance to travel, coincidentally both called up to the tour to Australia in 2013, were Welsh wing Shane Williams and former Ireland prop Tom Court. Williams, in Australia as a radio commentator, was drafted in for one match following a spate of injuries, while Court happened to be on a family holiday in Australia at the time of his summons.