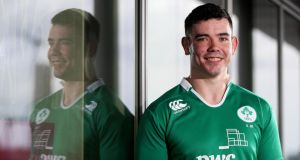 Ireland’s under-20 captain Paul Boyle was informed of his new status – he led the side for most of the Six Nations Championship game against France following an early injury to Calvin Nash – while driving up to Dublin on Tuesday afternoon.

“I had to pull over fast, because I’ll tell you it was a surprise to me. I was delighted to get it. The lads that have captained the team so far have experience and they’ll be able to help me along the way.”

The Gorey native didn’t dwell on what might be labelled as a ‘captaincy curse,’ as previous incumbents in the role this season - Jack Kelly, Cillian Gallagher, Calvin Nash and Caelan Doris - have all sustained injuries.

Lansdowne number eight Boyle leads a 28-man Ireland squad to the Under-20 World Cup in Georgia next month, where they will face pool matches against Italy, Scotland and New Zealand, the latter who they beat en-route to the final last season, before losing to the home country, England.

The injuries to McPhillips and Johnston mean that Conor Dean - a son of former Ireland international and current senior team manager, Paul - Angus Curtis, a son of David, who won 13-caps for Ireland in from 1991-1992, and Young Munster’s outstanding pivot, Alan Tynan, will contest the number 10 jersey.

Peter Malone takes over as head coach for the tournament after Nigel Carolan stepped down following the Six Nations to prepare for his new role as backs’ coach with Connacht.

Former Ireland scrumhalf and Irish Under-19s coach Kieran Campbell has been added to the coaching ticket to look after the backs. There are no survivors from last year’s playing group that took Ireland to the final in Manchester.

There is a familiar look to Ireland’s pool opponents, albeit that Ireland squeaked home 20-19 against Scotland with a late try, and had the exact same margin to spare against Italy, winning 27-26. Ireland’s progression through the Six Nations was pronounced and they were unlucky not to topple Grand Slam champions England in the final match at Donnybrook.

But Malone knows that his young charges have to kick on again in Georgia to be competitive. “I was coaching the defence in the Six Nations and I thought our defensive consistency at times (was lacking).

“We were good for periods, we just made very, very poor errors in the middle of games, two or three minutes knocking off and that cost us. The big thing for me is to get that defensively consistency right and you have to get your basics right.”

The post Six Nations review highlighted as much with a high missed tackle count, while retaining the ball in contact is another area in which the team will look to improve.

Malone was philosophical about the players denied to him through injury. “We knew that they would be missing from a fair way out and we planned for it. We had two trial games and introduced a wide variety of players.

“The squad that’s going, players are selfish beings, they won’t really care about the guys that are missing. They just want to make their own stamp and take their opportunity.”

Ireland’s matches in the under-20 World Cup will be broadcast live in Eir Sport, ITV and also streamed live on the World Rugby website.

Envoi Allen continues relentless march at Punchestown 13:30
England need 36 to win as bad light halts play in Sri Lanka 13:04
Bríd Stack hospitalised after injury in AFLW pre-season friendly 11:28
India rearguard frustrates Australia and leaves series in the balance 11:19
Brendan Steele takes the lead at Sony Open with a round of 61 11:10
Crossword Get access to over 6,000 interactive crosswords