Hayden Triggs loves Leinster but out of love with rugby 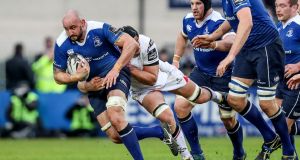 Leinster’s Hayden Triggs: “The game is different (now), and it’s almost like I don’t like it anymore.” Photo: Billy Stickland/Inpho

For those who panhandle quotes for a living, an interview with Hayden Triggs is as precious as discovering a rare, first edition. He’ll be missed as a player but also as a bloke, not least for his candour, addressing topics like suicide, depression, the malaise of social media and how he’s become disillusioned with professional rugby.

He hankers after the days when Thursday evenings concluded with a beer after training, where teams bonded on buses travelling to club matches. There is an element of wistfulness or nostalgia but the former army mechanic makes no bones about being ‘old school’ in his rugby outlook.

The 35-year-old secondrow from Lower Hutt returns to New Zealand later this summer after two seasons with Leinster – 30 appearances and counting – a rugby journey he hopes will conclude with a Guinness Pro12 title.

Triggs has no interest in playing rugby anywhere else. “I’m of the firm belief, Leinster, to me, there’s nothing better, as a club.

“I’ve said it time and again this club is awesome, it’s the best I’ve been involved with. They say the grass isn’t always greener, and I firmly believe it with this club.”

“It’s not a case of wanting to win, a bit of silverware, but I need to. I’d love to leave my mark, my name, on this club with something positive. That would mean the world to me. I’m not getting ahead of myself; we need to deal with a good team coming to the RDS. I don’t want to sound like we’re going to be there, but me personally, I’d love nothing more.”

Triggs maintains that his body would allow him a couple more seasons but mentally it is time to check out; the sport rather than the people in it have gone to a place for which he no longer cares.

“Rugby has just changed beyond identity to me. I started when it was semi-pro, and just starting professionally.

“The game is different (now), and it’s almost like I don’t like it anymore. As professionals, we’re paid to do this, that’s kind of our product. The game is what I love, I’ve said that before, but all the shit around it is hard.

“I see the guys who have just retired, sadly passing away, or having heart complications or, the worst case scenario, committing suicide.”

He’s hugely critical of the intrusiveness of social media. “The people of rugby don’t change. So, like, what I’m talking about is the social aspect.  “Look what social media has done to society in general, and the light is even brighter on rugby and sportspeople in general. They’re under the spotlight even when they’re not in a Leinster shirt.

“In New Zealand, and it’s a bit different here, but a sportsman runs a red light and there’s a dude with a camera giving out to him and going to report it to the cops.

When it’s suggested that what the young players don’t know they can’t miss, Triggs continued: “Yeah, fair enough, but for me it’s unrecognisable. I’m an old school guy, I’ve done well to keep going in this game, I’ve been able to adapt, that’s just my personality. Body-wise, physically I could keep going for another two years, but mentally, I’m done.”

Does he worry about how he’ll cope in retirement? “No, I’m pretty good at expressing my feelings. I don’t mind chatting to people. I mean (Dan) Vickerman (the South African born Australian international who committed suicide), that hits home to me; same age, same kind of deal that’s going to be happening. He seemed fine and dandy until it was over.

“I think about that, not constantly, but I have to check myself every now and then, make sure that I find away to deal with it. As much as I’m looking forward to getting away from the spotlight and all of the stuff that comes with the rugby, I know I’ll miss it.”

He’ll take away cherished memories: those from his first day at Leinster when he was convinced everyone was called ‘Dave,’to, on a more sombre note, the support that he and his wife Mikala received after the tragic death of their two-day-old daughter, Stella.

“Through our tragedy this year, seeing the people around us in a non-rugby sense support us. To me, that was mind-blowing. We were here 12 months and we had, from all different directions, love, prayers and support; as a mature adult, that was probably one of the best things, off-field anyway.

“I hate to blow his trumpet but I knew who Johnny Sexton was from New Zealand for a long time. He was the first person to invite me and my family around for a barbeque. To me, that speaks volumes of the characters in this club.

“That was significant to me, one of the biggest names in Leinster history opened his arms first and said ‘Come and chill out, and meet us’. It was cool.”

He won’t be going home immediately after the end of the season, hanging round for a couple of months to catch-up and enjoy a few beers. The future can wait a while.

5 Andrew Porter: 'There’s not a day goes by when I don’t think of her'

Dias and Stones score as City surge further clear with West Ham win 15:03
Sam Bennett denied hat-trick of wins at climax of the UAE Tour 14:45
Offaly’s Michael Duignan: Extra GAA funding for Dublin is unfair 14:35
John Horan: Gaelic games retain same status despite loss of Level 5 Covid exemption 12:09
Gatland considering Jersey as base for Lions ahead of series 11:24
Here is your handy guide to sport on television this week