Tyler Bleyendaal expected to be fit for Ospreys clash

Rassie Erasmus: ‘Injury wise it is looking good with the 14 day turn around’ 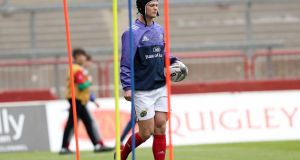 Munster’s Tyler Bleyendaal will train with the team this week. Photograph: Billy Stickland/Inpho

Munster had positive news on their injury profile ahead of Saturday’s Pro 12 semi-final against Ospreys at Thomond Park.

Both outhalf Tyler Bleyendaal and Alex Wootton will train this week and are expected to be available for selection against the Welsh side.

Bleyendaal and Wootton sustained respective bicep and hamstring injuries in their Pro12 win over Connacht, but Director of Rugby Rassie Erasmus confirmed on Monday that both players are expected to return to full training this week.

“Injury wise it is looking good with the 14 day turn around,” said Erasmus. “There are no fresh injuries so that looks good and we expect them to train this week.”

Bleyendaal, said the coach, had an arm injury that may have to have some medical attention later but for now was healthy enough to continue playing.

He added that match fitness were the main thing for a number of players including Conor Murray, who is also expected to take his place at scrumhalf opposite Welsh international Rhys Webb.