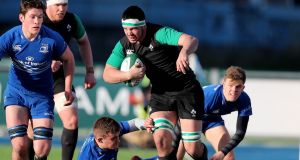 Ireland under-20 coach Peter Malone has named his squad for the World Rugby U20 Championships in Georgia with Lansdowne’s Paul Boyle as captain.

Jordan Duggan, Angus Curtis, David McCarthy, Alan Tynan and Michael Sylvester come into the squad for the first time after excelling at under-19 level.

The tournament takes place from the May 31st to June 18th, with Ireland playing their Pool games in Kutaisi, before moving to Tbilisi for the knock-out stages.

Ireland share Pool B with Italy, New Zealand and Scotland.

malone said: “It’s an exciting time for these players, as they will all be experiencing a World Championship for the first time. It’s a great opportunity for them, to go out and pit themselves against their peers from around the world.

We’ve lost a number of players who were involved during the Six Nations through injury, so it’s very unlucky for those guys not to be involved, but it gives other players the chance to wear the green jersey on the world stage.

We’re in a really strong pool with Italy and Scotland who made us work really hard for wins during the Six Nations, and then New Zealand who will have a number of players back from last year’s tournament so they will be a huge test for us.”

Ireland will open their campaign against Six Nations rivals Italy on Wednesday May 31st in the Kutaisi Stadium. They will then meet Scotland on Sunday June 4th and their final Pool B game takes place against New Zealand, who Ireland defeated for the first time during last year’s Championship, on Thursday June 8th.

1 Sky Sports customers set to save on bills until Premier League returns
2 ‘This is sick’ - seventh-tier Swedish club cancels friendly after betting mayhem
3 Jack Grealish needs to show that his remorse is real this time
4 Gerry Thornley: Changes to tackle laws could transform rugby by time of next World Cup
5 My favourite sporting moment: Phil Mickelson’s miracle shot at the 2010 Masters
Real news has value SUBSCRIBE